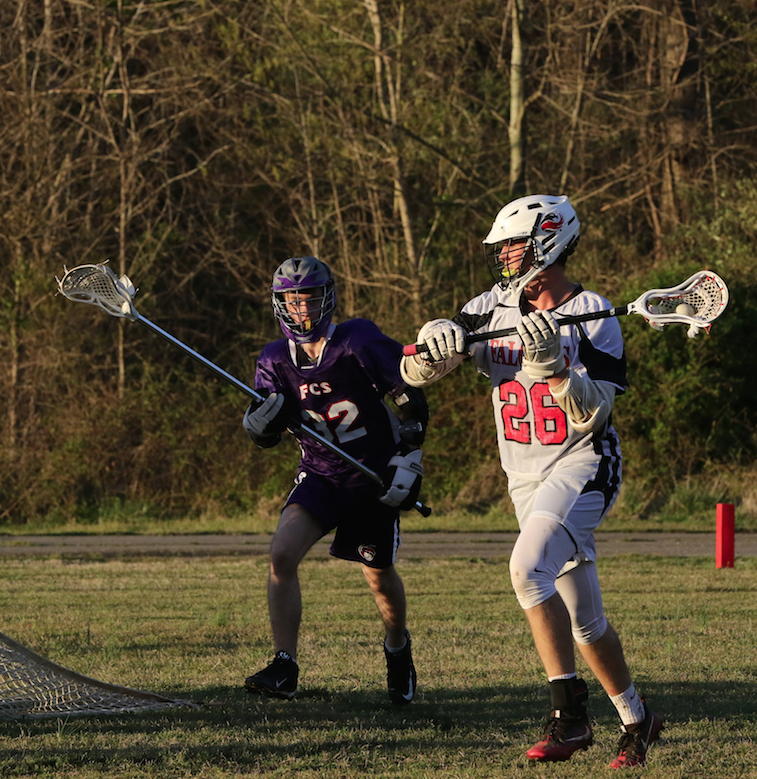 TITUS MOHLER | HERALD Fuqua School senior attackman Ed Newman, right, moves the ball against Faith Christian School on Tuesday. Falcons Head Coach Patrick Murphy said Newman brings physicality to the team and no opponent has really had an answer for him yet.

The experienced but undermanned Fuqua School varsity boys lacrosse team achieved its first win of the season Tuesday, the latest in a string of impressive performances by the tireless Falcons.

“From an execution standpoint, we did a lot of things right,” he said. “We still have room for improvement. We have several guys that are new that are only in (about) their … second week of playing ball, so we’re making good strides. I’m hoping to peak sometime in the second half of the season.”

The Falcons hold a 1-4 record so far in their second year as a varsity team.

Last season, Fuqua went 0-9, but it brings back almost everyone from that team with another year of valuable experience.

The Falcons lost attackman Noah Sheppard to graduation, but they feature a roster this year of six juniors, five seniors, one sophomore and one freshman.

Having a low total number of players has created a significant challenge for the Falcons, whose opponents have had much more depth.

“(The) first couple games we only dressed 11 (players),” Murphy said, noting that opponents have come in with 20 to 30. “They’re substituting lines, I’m substituting players.”

The coach said his team earned the respect of Trinity Episcopal School’s coach after the Falcons fell only 12-11 despite being outnumbered 25 to 11.

Fuqua returns to action Wednesday when it visits North Cross School at 4:30 p.m.