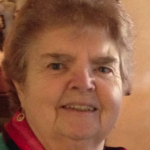 Nettie O’Brien Jennings, 77 of Charlotte C.H., passed away at Retreat Hospital in Richmond on April 8, 2017 after a long battle with cancer.

She was born in Appomattox, on December 4, 1939 to the late Francis and Mary O’Brien. She is preceded in death by her husband David O. Jennings.

She worked as a substitute teacher and bus driver for Charlotte County Public Schools, and then worked at Southside Community Hospital for over 20 years.

She has been a member at Bethlehem Presbyterian Church for over 50 years. She had a great love for reading and traveling, especially to Ireland.

A memorial service will be held at Bethlehem Presbyterian Church on April 15, 2017 at 1 p.m. conducted by William Strong. Reception following at church.