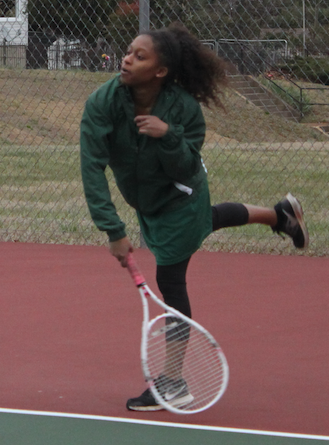 “We are a strong team,” Lady Knights Head Coach Erin Lake said. “Our players play hard for every point, practice hard, have a cohesive connection with one another and are motivated.”

Filling out the top six singles spots for Buckingham are senior Rebecca Ragland, at No. 1, senior Kimani Gough, at No. 2, senior Emily Vaughn, at No. 3, senior Taylor Costello, at No. 4, sophomore Alyssa Gormus, at No. 5, and alternating every other match at No. 6 are senior Abbey Phelps and sophomore Dien Dang.

Highlighting the five seniors in the preceding list, Lake said, “It has been great to work with them throughout the years and see them grow as players.”

They are sustaining the legacy of success that they have been a part of. The 2016 Lady Knights advanced as far as the Region 2A West tournament semifinals, placed second in Courthouse Conference 37 and finished the year with an overall record of 14-5.

Three of the top five singles players from that team graduated, including No. 1 Sydney Shifflett, No. 3 Alex Ayala and No. 5 Kalie Gentry.

As a doubles team, Shifflett and Ayala advanced to the 2016 regional quarterfinals.

But much talent remains on the 2017 roster for the Lady Knights.

“We have determined players on our team who do not give up,” Lake said. “When facing difficult teams, they tend to play their best tennis. I expect we’ll advance to the region tournament.”

Ragland and Gough, who also comprise the No. 1 doubles team for Buckingham, are returning team captains, and Lake said they “are strong and consistent players who deserve special recognition. In practice and matches, they are typically successful in their play.”

The coach also put a spotlight on senior Kayleigh Toney, who plays on the Lady Knights’ No. 3 doubles team after returning from a right shoulder injury suffered a couple of years ago.

“This injury prevented her from playing last season,” Lake said. “As a result, she is not able to play singles and has taught herself how to play left-handed. She has been playing well and is one of the most determined and adaptable people I know.”

Gormus and Dang drew recognition from Lake as up-and-comers, as both of them have learned the game well and are showing consistent improvement this year.

“Assuming they continue practicing and play next season, they will be a couple of the top players,” Lake said.