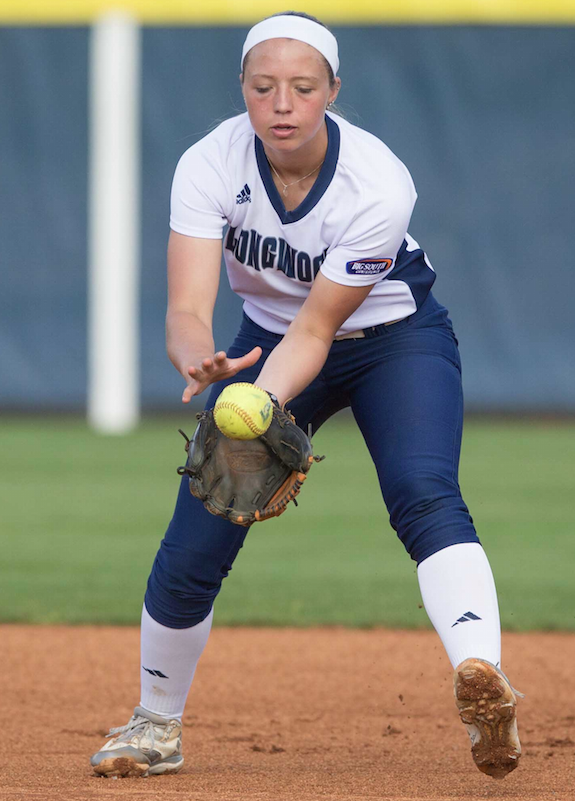 Longwood University’s softball team has started to turn the tide after a surprisingly slow start to conference play in light of high preseason expectations.

As the 2017 regular season nears its end, the Lancers (21-26, 10-8 in the Big South) have won five of their last six games, and on Wednesday evening, they won their three-game series against host Liberty University, which is ranked No. 1 in the Big South Conference.

Prior to Wednesday’s doubleheader in Lynchburg, Longwood Head Coach Kathy Riley spoke about what has helped the team gain momentum within the past week.

“It’s just the kids maturing and getting feedback by how the games are going,” she said.

Riley noted that in the recent home series against Charleston Southern University, which the Lancers swept, they were fortunate in the first game to come back and win in the last inning.

“I really felt like that … gave us impetus in the second game and more confidence, and we have really been pushing hard to play our best, and I think sometimes we try too hard, and so I just think the amount of success we’ve had is really starting to relax them,” Riley said.

After defeating Liberty 3-2 on Tuesday, Longwood split the doubleheader with the Flames on Wednesday, losing 7-6 in game one, but winning 3-0 in game two to clinch the series.

The Lancers, ranked third in the Big South, conclude their regular season with a three-game series at Radford University.

Riley said that going into the series’ first game, set for Friday at 7 p.m., “I’d like to see us not be concerned about whether we’re third or fourth in terms of the standings in the conference and really focus on the items that are going to help us the most down the stretch.”

She identified one of those items as the continued building of confidence.