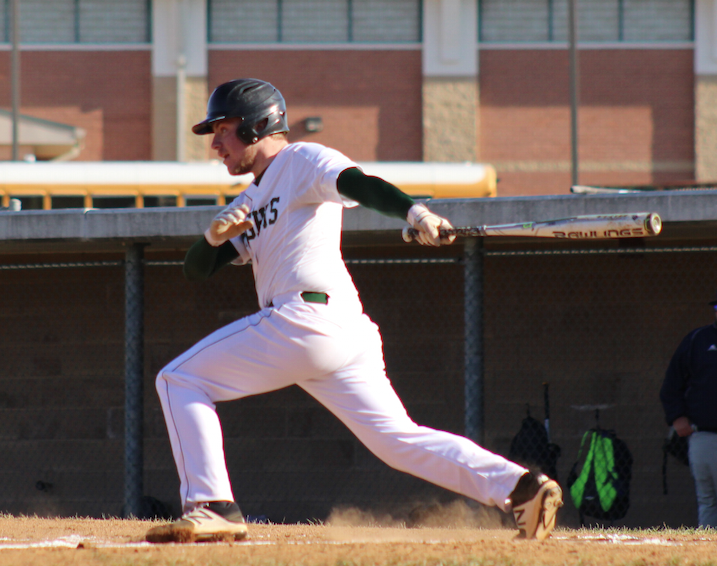 LYLA WOOD Buckingham County High School senior second baseman Hunter Shumaker watches the result of his swing during a game earlier this season. He has swung the bat well for the Knights in recent years and is expected to continue producing big hits during the 2017 season.

The opening stretch to the 2017 season has been a difficult one for Buckingham County High School’s varsity baseball team.

The Knights held a record of 1-5 going into their game Tuesday at Cumberland High School.

“We’re not performing as well as I would have hoped,” Buckingham Head Coach Michael Jones said Monday. “Right now, defensively, we’re our worst enemy. We’re not playing solid, defensively, which has cost the last few ballgames. The last ballgame that we played, against Amelia, our pitching held up. Juwan Dibble pitched well enough to have won, but again, our defense let us down.”

It’s still relatively early in the season, and Jones said he expects mistakes, “but not as many as we’ve been making.”

He is hoping the the Knights will have a recovery similar to the one they enjoyed last year, when they started slow with a similar record and finished with an overall record of 12-11.

“We started playing really well toward the mid-to-latter part of the season, and things fell into place, our pitching came around, and we started swinging the bat much better and just played better as a team,” Jones said.

Buckingham was competitive early in the first round of the Courthouse Conference 37 tournament before falling to highly-favored Randolph-Henry High School.

Jones said he lost two starters due to graduation after last season, including first baseman Michael Allen, who was an all-conference and all-district selection.

“He’s one of the best players I’ve ever had here, and he’s just tough to replace,” the coach said.

This year, Buckingham has moved to Region 2A East and Quad Rivers Conference 34.

Jones said the hope coming into the season was that senior Christopher “C.J.” Ragland Jr. would be the team’s No. 1 pitcher, but he has struggled early on.

“He started against Goochland, and again, he struggled to throw strikes, and so he didn’t last very long,” Jones said.

But the coach expressed confidence that Ragland would be able to figure out what he needs to do to improve.

Jones and his staff are also looking for big things on the mound from Dibble, a senior.

Jones said senior Hunter Shumaker “has been our big home-run guy and RBI leader for the last couple years … and he’s swinging the bat good again this year.”

The coach also said Newby and Taylor have been swinging the bat well, and he also expects contributions from senior Daquarius Holman.

“Our bats came around a little bit in the last ballgame,” Jones said Monday. “Hopefully our offense will pick up a little bit, but we’ve just got to go and practice and work on shoring up our defense. And I think that if we do that, with the combination of C.J. coming around on the mound, I think that we’ll be OK down the stretch.”

The Knights visited Cumberland on Tuesday, and they visit Nelson County High School on Thursday at 5 p.m.