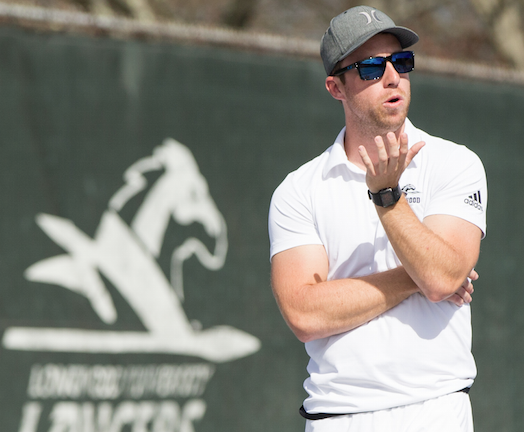 MIKE KROPF | LONGWOOD UNIVERSITY Pierre Tafelski led the Longwood University men’s tennis team to unprecedented success in only his second season as head coach, and both he and two of his standout players received Big South recognition for their accomplishments.

The Lancers’ season came to a close last week when, as the No. 4 seed, they lost 4-1 to No. 5 Winthrop University in the quarterfinals of the Big South Championships, but their season will largely be remembered for all of the wins that they packed into it.

Earning the title of Big South men’s tennis Coach of the Year was Pierre Tafelski, who, in only his second year as Lancers head coach, led them to a 14-6 record, which represents the most wins in a season in program history.

Prior to this season, the Lancers had not won a single Big South match, but during the 2016-17 regular season, they actually went 4-3 against conference opponents. The No. 4 seed they earned in the conference tournament was the team’s best yet in its time as a member of the Big South.

“It’s definitely a great year for us,” Tafelski said, adding that it took a lot of time and consistent effort to make it happen, with more emphasis put on the process and less on outcomes.

In reference to the title of Big South Coach of the Year, Tafelski said that “beside(s) having a winning record and (having) a pretty good record overall, being nominated and then actually awarded that title — that means a lot to me because it means other coaches in the Big South are (recognizing) our work and our improvement within only about two years, so it’s definitely a great honor for me.”

In addition to making the All-Big South first team for singles and for doubles, Amadeo Blasco was named Big South men’s tennis Freshman of the Year.

“It’s great for him,” Tafelski said. “When I recruited him, I obviously had this in the back of my mind. I knew and understood the potential he had, and obviously it took a lot of hard work and a lot of growing up to do on his (behalf) throughout the year.”

Splitting time in the top three singles spots this season, Blasco finished 16-4. In doubles play, he also went 16-4, partnering with senior Florian Uffer, who was named to the All-Big South second team for singles and the conference all-academic team, in addition to sharing the first team doubles honor with Blasco.

Uffer went 12-7 this season while splitting time between No. 1 and No. 2 singles.

Tafelski praised Uffer for his development, and said his accolades were “the reward of a year and a half or two years of hard work with me.”