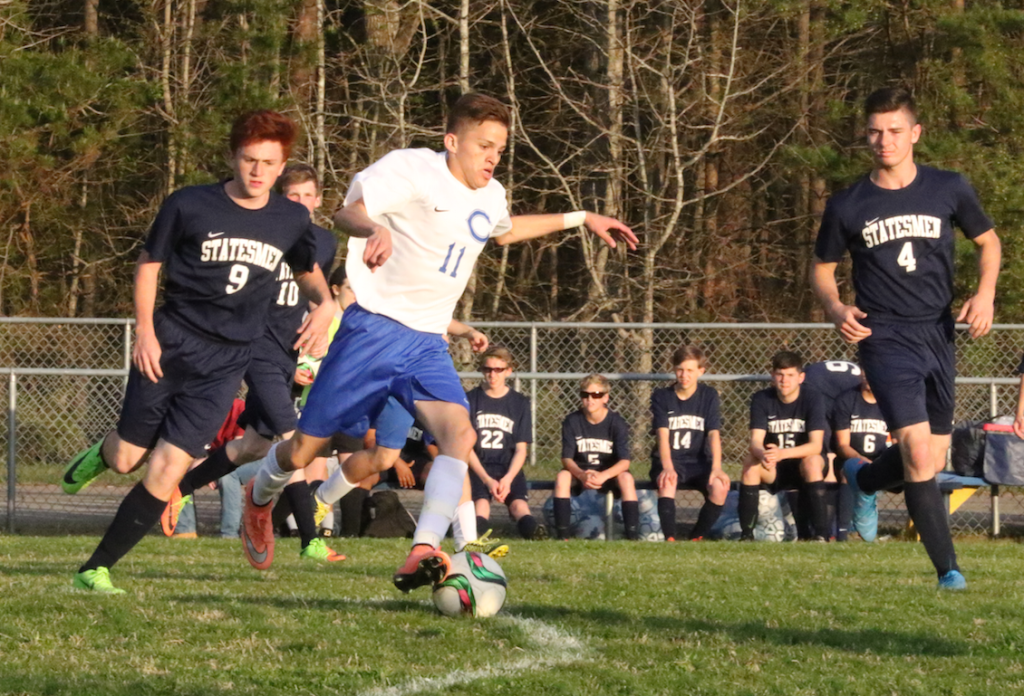 The challenge for much of Cumberland High School’s 2017 varsity boys soccer team is to learn the sport quickly as the Dukes take on opponents that have players with greater levels of experience.

“But they have the potential,” Coach Heather Sutton said of the Dukes. “They’re very athletic, they’re very coachable, but I think a lot of it — just like the (Cumberland varsity) girls (team) — it goes back to lack of soccer experience until high school. Most of them started their freshman year, and so it’s still very new.”

The Dukes were competitive Monday against visiting Central Lunenburg High School but fell 5-4.

The loss put Cumberland’s overall record at 2-4 this year. The Dukes achieved a 5-3 home victory over Amelia County High School to open their season March 20, and their other win came April 3 via a 1-0 score against visiting Buckingham County High School.

Sutton said the Dukes have been frustrated thus far this season.

“Some days, they click and they play really well together and they trust each other and they play soccer,” she said. “And then there’s other days where there’s no trust, there’s no communication, there’s no movement, they become very frustrated, and it’s just torture to watch because you know that they can be a soccer team but they’re choosing to be, I don’t know, different, I guess.”

The group is seeking to build on the 2016 season during which Cumberland went 3-14-1.

Sutton expects to see significant improvement from the team this season when its final overall record is determined.

Leading the way for Cumberland are senior forward/midfielder Matthew Bapties and junior midfielder/defender Hunter Cochran, both of whom have experience playing for club teams.

“They’ve been staples for a few years for us,” Sutton said, noting she is working with them to be good leaders to the less experienced players, who represent a significant contrast to the seasoned players Bapties and Cochran are accustomed to playing with on club teams.

New to the Dukes this year is junior forward Jonathan Lagos.

“He and his family moved here from Honduras, and he’s very talented,” Sutton said. “He was actually on some of the Honduras national teams over there. … He’s fun to watch play.”

Some of the other staples of Cumberland’s lineup include junior Sonny Dominick and sophomore Noah Bland, both of whom are back for another year as center defenders, Sutton said.

Sutton said Sims is brand new to the sport, but “he’s crafty and quick” and has shown remarkable potential.

She also highlighted sophomore Oscar Sustaita, who is in his second year on the team.

“You can already see the progress he’s made this year,” she said, noting he is a workhorse for the team and usually plays as an outside midfielder.