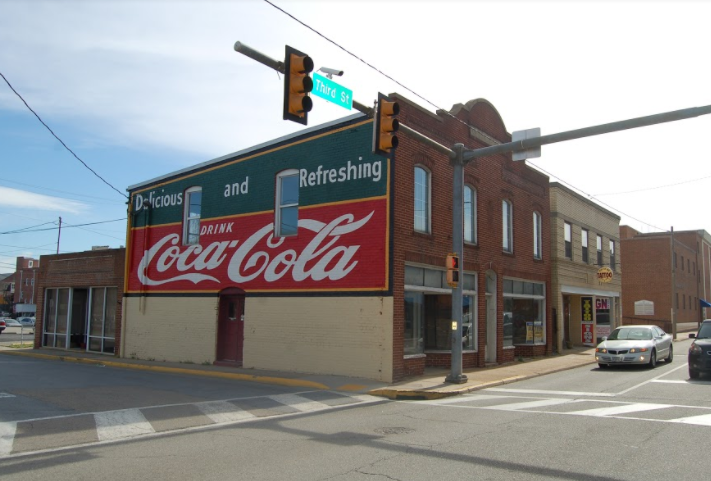 MORGAN WHITE | HERALD The building at the corner of West Third and North streets, known for its Coca-Cola mural, was sold Wednesday. The new owners are seeking to open a restaurant in the space.

The brick building at the northeast corner at the intersection of West Third and North Street — one that received a fresh coat of paint on its once-faded Coca-Cola mural last fall — is set to become a restaurant.

The building, along with property outside of town, was sold by online auction by Tranzon on Wednesday, April 5 for $84,000, on top of contract fees of $8,400, to a couple from Virginia Beach.

Julie Ramsey said she and her husband, Brandon, recently purchased a second home in Farmville that they’ve gutted and renovated and were looking to do the same with the property they purchased through auction.

“I went to Longwood, so there’s that connection, and just really enjoy Farmville and getting away from the hustle and bustle of Virginia Beach,” Julie said. “…(Brandon) owns a restaurant (in Virginia Beach) and we keep talking about he should open one in Farmville, 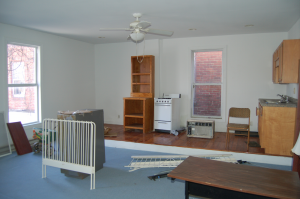 MORGAN WHITE | HERALD
The upstairs of the building at the intersection of West Third and North streets is a three-bedroom apartment that could be turned into two apartments.

and this property came up and it’s just a great location.”

Julie said they plan on keeping the integrity of the building because they love the storefront, noting the building’s “amazing” history. 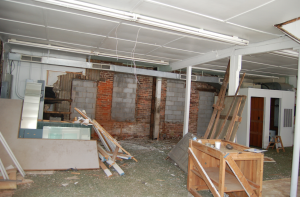 MORGAN WHITE | HERALD
The first floor of the building at the intersection of West Third and North streets needs a full renovation — one the new owner Julie Ramsey said she and her husband will undertake.

“We just want to refurbish it, make it fresh and new and put a restaurant in,” Julie said.

Ramsey said she and her husband had a lot of work to do on the building before they could begin thinking about what the concept of the restaurant would be, noting the business would be something that would be friendly for college students, but also for families and children.

“We don’t want to open a nightclub in Farmville, I’ll just put that out there right now,” Julie said.

“There’s been interest in the building, but no one’s applied for a building permit yet,” said town spokeswoman Kate Pickett Eggleston. “And anytime there are new businesses that are getting started … we’re excited for them and excited for the town as a whole. That’s a great location close to downtown and walkability for students and would be a great location for a restaurant.”

As for the upstairs portion of the building, Julie said they were still figuring out what to do with it.

Prior to the close of auction, Tranzon Auctioneer Linda Terry said, “It’s an interesting building (with an) interesting history, and we need to find somebody who’s got an interesting use for it.”

Terry said there had been several groups of people looking at the building. She said the building, which was last used as a clothing store, was the original home for the Grand United Order of Odd Fellows (GUOOF), chartered in the 1850s.

According to a press release from Tranzon, by 1900, when the building was constructed, the GUOOF was the second largest African-American fraternal organization in the United States with more than 200,000 members and more than 2,000 lodges.

“Its membership consisted mainly of lawyers, doctors, military officers, ministers and other professionals,” company officials said in the release.

The Coca-Cola mural was first painted on the building in the 1990s, the release noted.

“There are two storefront entrances and glass display windows. This level needs full renovation,” auction officials said in the release.

The space includes a third door at the street to access the space upstairs for a three-bedroom apartment that Terry said could be reconfigured into two smaller apartments.

“We’re also selling the family farm just outside of town. The same bidding process (for the) 277 acres in different parcels,” Terry said.

She said there were six building lots on Cedar Avenue that used to be the site of the family’s used car lot.