Design in the vegetable garden 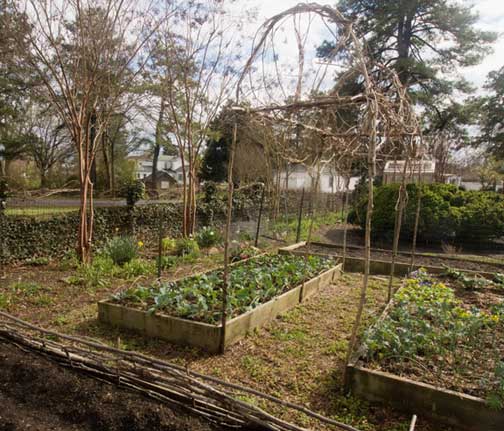 Twig arches can be used for vines and visual interest.

Many years ago, when I was a kid, growing vegetables was serious business. We had row after row of melons in a location some distance from the house, and then everything else just down the hill.

Like all of our neighbors, we had multiple plantings of red and yellow tomatoes, white and yellow corn and pop corn, potatoes, green and yellow squash, sweet potatoes, eggplant, peppers, greens of all sorts, crowder peas, green peas, broccoli, onions, strawberries, watermelons and cantaloupes. 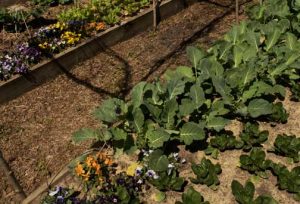 Diagonal rows help highlight the colors and textures of plants.

Growing vegetables was all about no-nonsense, long, straight rows with enough space between the rows for two people to stand back to back while picking whatever was in season. This approach certainly worked. We were far more interested in growing enough food to feed ourselves than the aesthetics of the garden plot.

When I moved back here more than 25 years ago, I followed the same approach: long, no-nonsense rows. Recently, however, I’m shifted to a different model, loosely based on what I saw at Chanticleer Garden several years ago.

The philosophy there is that, yes, the garden has to produce food, but it doesn’t have to be boring. The vegetable garden there has asparagus planted as a border around the plot. There are cherry tomatoes growing on the fence. Not all rows are planted in straight lines and best of all, there are two huge carrot shaped structures made of vines and branches left from spring pruning.

I have a series of raised beds surrounded by a not particularly pretty fence designed to keep out dogs and small children, but the fence is slowly being covered with vines, and the gate is a whimsical concoction of tree branches. There are paths with stepping stones between the raised beds and arches made of saplings and vines spanning the walkways. I’ve even made an in-place container of twigs at one end of the garden that I use for collecting weeds.

The raised beds? They’re planted in diagonals that show off the varying colors and textures of the plants being grown. Right now, there are lots of green leafy things — lettuce, spinach, chard, kale — plus some sorrel, horseradish and prehistoric-looking rhubarb plants with red stems and wild leaves.

I’ve interplanted the greens with leeks, beets, onions and pansies. Yes, pansies are a great addition to salads, and they add cheer to the garden, so why not? The potatoes are still planted in plain rows, but they’re in separate beds bordered with flowers. Within the next week, I’ll add tomatoes and all the other summer favorites, as well as marigolds. I’ll plant extra squash so that I can harvest the male flowers for stuffing with cheese or catfish mousse and frying. Maybe I’ll plant cucumbers next to a rustic trellis that I’m making and then train them to grow up and around it.

The garden looks so inviting that I’m probably going to add a small table and chairs where we can sit late in the day and enjoy it all. When I was a kid, our favorite spot for shelling peas and beans was under the pecan trees. Maybe we’ll just stay in the garden, sip lemonade and do our shelling there. Happy gardening. It’s about what makes you smile.

Sowing Seeds — Don’t hesitate: Take a ‘walk across the room’