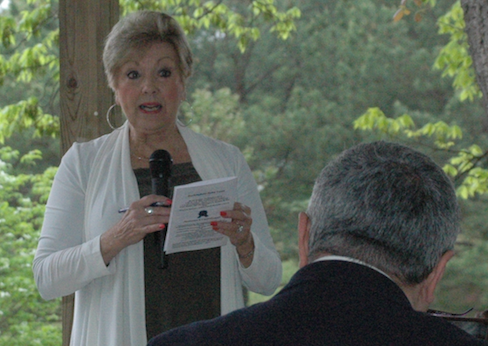 Dillwyn’s Hope Day, an event for the community to support Buckingham and Cumberland’s Relay for Life, allowing cancer survivors a chance to share their stories, was held in Buckingham on Saturday.

The event was held at Ellis Acres Memorial Park, where nearly 20 members of the community came together. Many in the audience had experienced cancer firsthand or were supporting a friend or family member with the condition.

During the event, Pastor Billy Swan offered a sermonette, DJ Percy Ayers provided inspirational music and several cancer survivors discussed the impact of the disease and its treatment on them.

The group also placed purple ribbons throughout Dillwyn to bring awareness both to Hope Day and the Relay for Life’s efforts.

Mayor Linda Paige, a breast cancer survivor, has played an integral part in the annual Hope Day event since it began four years ago.

She said discussing her story was difficult for her, having lost several family members to cancer, but said she is thankful to see the community’s involvement in a cause important to her and others.

“I’m grateful to be here,” Paige said. “It’s an experience.”

Both Paige and Chris Wood, the event’s emcee who works as program director for WFLO Radio Station, stressed preventative measures in detecting cancer, including performing self checks and having regular visits to the doctor.

Wood, who said childhood experiences had given her “White Coat Syndrome,” or a fear of doctors, was grateful to her doctor who detected her breast cancer and Dr. Kirsten Huber, of Centra Health, who performed the surgery to remove the tumors.

Wood said she has been cancer-free since December.

Following the sermon and music selections, Relay for Life event organizer Donna McRae-Jones offered updates on this year’s Relay events, holding a raffle where tickets with the winning numbers received gift certificates to Pino’s Italian Restaurant, McDonald’s of Dillwyn and The Spa in Dillwyn.

Buckingham and Cumberland’s Relay for Life’s main event will take place at Cumberland High School on May 5, starting at 5 p.m. and its theme will surround Cinco de Mayo.