The event was hosted by the Longwood Politics Club and moderated by students.

Present were the College Democrats of Longwood, the College Republicans of Longwood and the university’s libertarian club, Longwood for Liberty. Topics ranged from military spending to immigration to education.

“It’s fantastic that we have representations of these parties within our student body, and I hope that more political ideologies and parties are represented in the future,” said Kyle Stone, one of the representatives for the College Democrats.

One of the goals of the event was to keep students politically engaged after the presidential election. Audience members were able to submit questions via Twitter near the end of the debate that they wanted students to discuss. 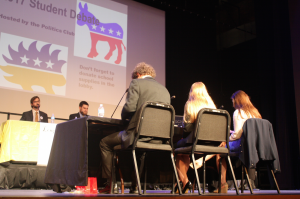 ANNA BULTROWICZ | HERALD
The event was completely moderated by students. Later in the evening, members of the audience were able to submit questions via Twitter.

“The atmosphere was really receptive the whole night. There were people who I saw were really engaged and taking every argument into account,” said Timothy Wengert, one of the representatives for the College Republicans.

At the end of the debate, audience members voted Longwood for Liberty as the winner. The club was represented on stage by Kyle Dobry and Stuart Gossler.

The Longwood for Liberty club was formed only a year ago, but the club has been working to raise political awareness of the Libertarian Party.

“We had three different points of view on stage, which is very different from debates that have gone on in the past,” said Dobry.

Dobry views the Libertarian Party as a bridge between the Democratic Party and the Republican Party.

“I think our greatest strength was that, on some aspects, we agreed with both sides,” said Dobry.

“To me, every person should be engaged in politics. I would rather see someone disagree with my views but be informed, compared to being uninformed and thinking that politics isn’t important,” said Wengert. Although the representatives for each club expressed at times dramatically different views, the debaters remained respectful and open to new ideas.

“There were times when the debate got a little heated. Interruptions were made a couple of times, but I believe that was because of the discussed topics have personally affected many of our lives,” said Stone. “Still, there was always a respectful atmosphere. I sincerely believe that everyone has the utmost respect for each other on and off the stage.”

The Politics Club also used the event as an opportunity to gather school supplies for Prince Edward County Public Schools.