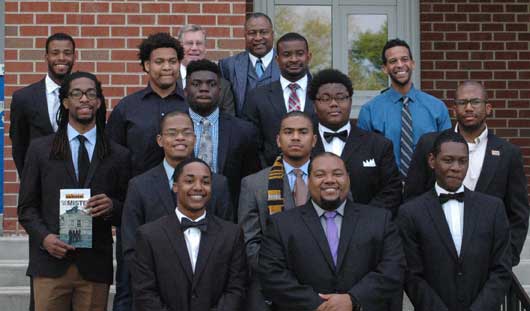 Current, past and soon-to-be members of Call Me MISTER and its leaders and supporters united Friday for the organization’s 10th anniversary at Longwood University, which included a banquet welcoming three new student-members into the program.

The program, which began at Longwood in 2007, gives African-American male students pursuing careers in education training, support and opportunities to connect with area school systems and volunteer opportunities, which include speaking and organizing events for area elementary, middle and high school students.

The ceremony was held in the Nance Room at the Dorrill Dining Hall.

JaVontae Pegram, Brian Snead and Seth Gilliam — all freshmen — received certificates and handshakes from Dr. Maurice Carter, the program’s director, welcoming them into the Call Me MISTER program.

Alex Morton, an alum of Call Me MISTER and a 2016 graduate of Longwood University, teaches history at Nottoway Middle School and brought seventh-grader Anthony Mitchell and eighth-graders Devin Rather and Raekon Parker to the event.

Mitchell, Rather and Parker said it was their first time visiting a university.

Carter said the Longwood University student inductees spent more than 100 hours volunteering and speaking at schools throughout the community.

He said there have been more than 180 students involved with the program’s summer institute and more than 60 students from Longwood who have been involved with Call Me MISTER. Many of the MISTER graduates teach in schools in Richmond and Charlottesville, he said, and one student is teaching overseas in France.

“For me, this is my 34th year in education,” Carter said, who noted he’s worked in positions ranging from administration to bus driving. “This is one of the most impactful projects I have ever been in.”