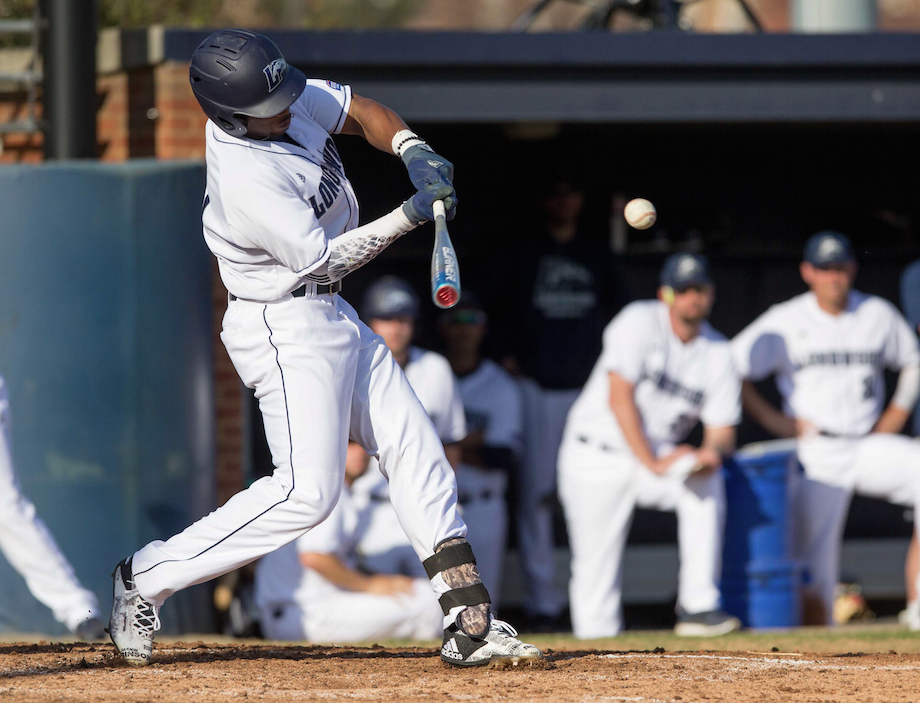 MIKE KROPF | LONGWOOD UNIVERSITY Longwood University freshman second baseman Nate Blakeney came through for his team when it needed him the most Tuesday night, leading the Lancers to a 3-2 home victory over North Carolina Central University.

The Lancers were held to just five hits in the game but came up with hits by Blakeney and senior Brandon Harvell with runners in scoring position and two outs to top N.C. Central (16-18). Neither team had a lead larger than one run at any point in the game.

“That was a much-needed win for our club,” Longwood Head Coach Ryan Mau said. “It was great to see our guys step up in high pressure situations and deliver. Although our offense was limited, Harvell and Blakeney came through with big hits when we needed them the most.”

Blakeney collected his lone hit of the day in the sixth inning, a single that proved to be the winner. He accounted for all three Lancer runs, going 1-for-2 with two RBIs and a run scored. Harvell drove in Blakeney on an RBI single in the third inning.

With the win the Lancers sweep the home-and-home series with N.C. Central and end a five-game losing streak.

Peterson (1-0) picked up the win in relief of senior starter Tyler Wirsu. Peterson spun 4.2 scoreless innings, holding NCCU to just two hits and allowing two walks with five strikeouts. Senior flamethrower Devin Gould picked up the save, his first of the season. NCCU reliever Ryan Decker (0-1) took the loss after allowing two runs in two innings of work out of the bullpen.

Peterson entered the game with the bases loaded in the fourth inning, allowing only one run to score in the inning on a sacrifice fly.

“I can’t say enough about the job Jon Peterson did for us out of the pen tonight,” Mau said. “He minimized their scoring opportunity in the fourth inning and was spectacular working out of trouble in the eighth. That was a big-time performance from him and Gould to secure the win.”

Harvell got the Lancers on the board in the third inning. Blakeney was hit by a pitch to start the inning. Freshman Scott Carter put down a sacrifice bunt to advance Blakeney to second base. Two batters later, Harvell hit a two-out single to left, putting Longwood ahead, 1-0.

The Eagles scored a pair of runs in the third inning to take a 2-1 lead.

After two quick outs in the bottom of the sixth, junior Justin Mitchell walked and was pinch ran for by junior Ryan Shull, and senior Alex Lewis reached on an infield single to put runners on first and second base. A wild pitch from Decker ensued, allowing Shull and Lewis to advance into scoring position, setting the table for Blakeney’s two-run single.

The freshman second baseman took a Decker 2-2 pitch and slapped it into left center to bring in the tying and go-ahead runs.

NCCU threatened to tie the game in the ninth inning, but Gould produced three punchouts to strand the runner at second and nail down the final out.