Beginning to build a program 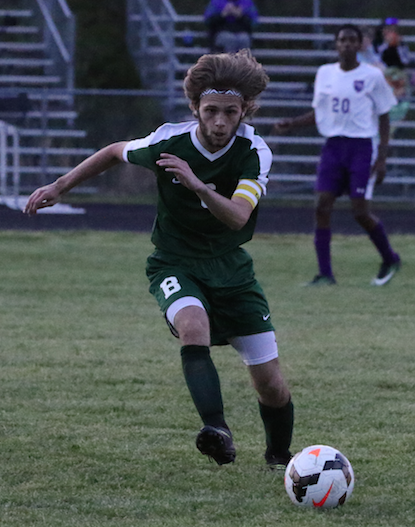 TITUS MOHLER | HERALD Buckingham County High School junior midfielder/forward Ethan Caldwell races toward the ball during the Knights’ game Tuesday evening. He is one of the primary leaders on the team this year.

One look at the squad’s roster confirms this perspective as well, as the Knights feature six juniors, six sophomores, three freshmen and no seniors.

Additionally, some of the players lack significant experience on the pitch.

“I’ve got three or four kids that have never played before until this year, so trying to get them up to speed along with other kids who haven’t played as much, it’s not easy,” Whittington said.

Buckingham carries a 0-5-1 record into its Friday showdown with visiting Randolph-Henry High School.

Though they lost 7-1 on March 27 to host Goochland High School, the rest of the Knights’ games have been close.

Whittington is keeping his expectations simple.

He made it clear that the goal is to build a program.

“We’re trying to, basically, start over, trying to change the mentality, get people … wanting to play and wanting to get better, and we just have to work in that direction,” he said.

Buckingham returned this season without some key players from its 2016 squad, which  went 8-8, losing in the first round of the conference tournament. Striker Tinos Trejo graduated after the season.

“I don’t know if we keep these records, but he’s probably one of the top scorers in the history of Buckingham County soccer,” Whittington said, noting that Trejo recorded 28 goals last year.

But he has some key players this year that he is leaning on to help lead the rebuilding effort.

In addition to freshmen goalkeepers/defenders Tyler Moree and Joe Test, the coach pointed to freshman midfielder Eli Caldwell as an up-and-comer.

“He’s one of those people that has shown a willingness to improve,” Whittington said. “He wants to be a better player, and he proves it every day in practice. When he’s there, he’s 100 percent all the time, and that’s kind of what we’re trying to get everybody to get to.”

The coach said the team must put the effort in to get the product out, “and that’s not going to work any other way.”

Whittington noted that Eli Caldwell, Moree and Test have played for him previously, giving them a good understanding of what he wants.

The Knights host the Randolph-Henry Statesmen on Friday with kickoff scheduled for 6 p.m.