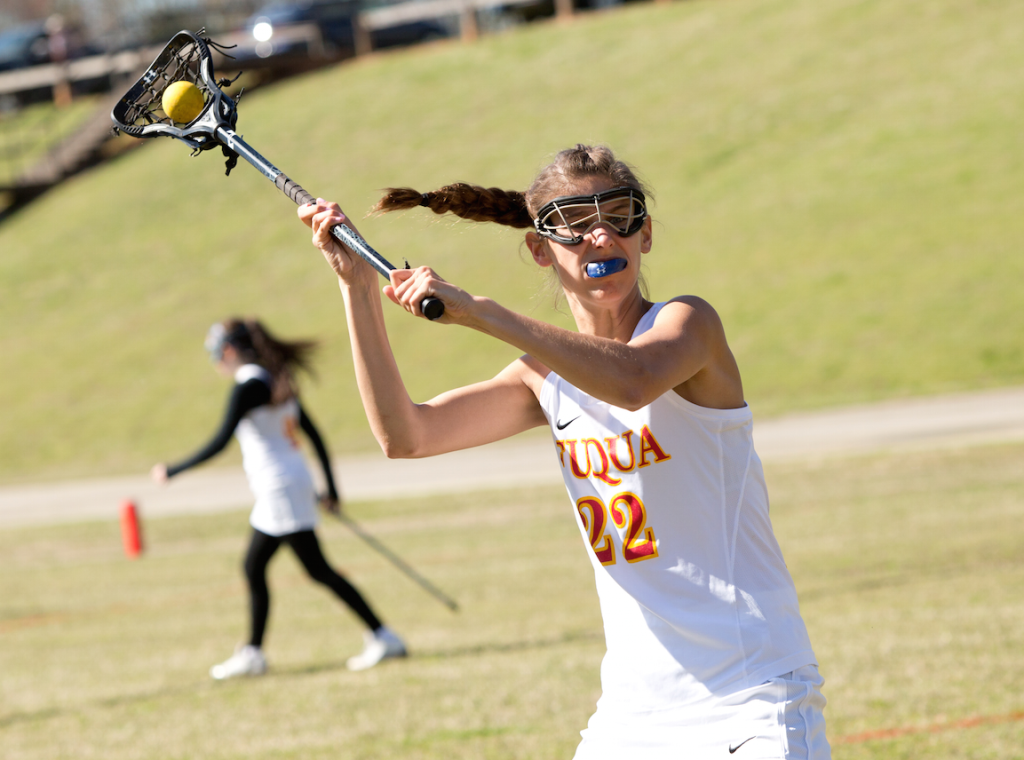 CALLY VOGEL Midfielder Harper Melton is the leading scorer on the Fuqua School girls lacrosse team in its first year as a varsity squad, and she serves as one of its captains as well.

Fuqua School’s girls lacrosse team is in its first year as a varsity squad, but the results it is producing are better than many might expect from such a young group.

The Lady Falcons hold a record of 3-2 so far this season, moving above .500 Tuesday with a 16-9 home victory over North Cross School.

In addition to being young as competitors on the varsity landscape, the girls on the Lady Falcons’ roster are also predominantly young in age. Comprising the team are five juniors and two seniors, but also seven freshmen, two sophomores and several middle school-age girls, including three sixth-graders.

Fuqua Head Coach Courtney Vogel indicated she is pleased with what she is seeing from her players thus far this year.

“They are extremely hardworking, devoted and positive players,” she said. “Their skills have been developing because of these attributes. We have already seen their progress over the last couple months pay dividends.”

The Lady Falcons opened the season with a 12-6 road win over North Cross on March 21, and they also orchestrated a 15-3 victory against visiting Chatham Hall on April 4.

The losses so far have included a 16-8 defeat to visiting Collegiate School on April 13 and a 16-3 March 24 road defeat against The Steward School.

Vogel hopes to help her players consistently realize that they have the ability to compete against established varsity teams, and she outlined her high expectations.

“I am confident that these girls will give their all at every game,” she said, adding that the hope is to have a winning season and “one that we can look back and be proud of. We are a young team, so we expect that we have to work hard to build up our skills and an understanding of the game.”

The coach noted that each person on the team contributes something special and integral to its efforts.

Leading the way this year for Fuqua are a trio of captains, including midfielders Harper Melton and Audra Murphy and defender Irene Thornton.

“Harper is our leading scorer, while Audra has a majority of our assists,” Vogel said.

At the other end of the field, “Irene champions our defense and is often heard (saying) while pushing out an attacker, ‘Not in my house!’” Vogel said.

Melton, Murphy and Thornton were voted team captains by their fellow players.

Vogel said their peers selected them “because of their excellent leadership, positive influence and how well they play the game. These girls have a passion for lacrosse and are devoted to playing it well with excellent sportsmanship.”

On a team featuring many potential up- and-comers, a few players in particular drew mention from Vogel.

She described Ashley Handy and Charlotte Haney as “extremely versatile,” adding that they can play either offensive or defensive positions and have increased confidence since the start of the season.

The coach also highlighted a pair of midfielders who are both eighth-graders — Sophie Watson and Elizabeth Hall.

“They have incredible potential and focus to make them strong competitors in their field,” Vogel said.

The Lady Falcons are two games into a five-game home stand. With all of their remaining regular season games scheduled to start at 4:30 p.m., they host Trinity Episcopal School on Friday, Virginia Episcopal School (VES) on Monday and Walsingham Academy on Tuesday.

They finish the regular season on the road, including visits to VES, Walsingham and Chatham Hall.