‘Nothing short of heroic’ 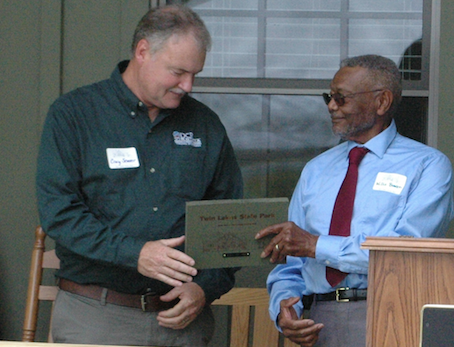 EMILY HOLLINGSWORTH | HERALD Director of Virginia State Parks Craig Seaver, left, presents Willie Bowen with a plaque made from the siding used to build the lodge dedicated in honor of Bowen at Twin Lakes State Park on Saturday. Bowen served as the first African-American district manager for the state park system, playing an integral role in the desegregation of Virginia State Parks.

Willie Bowen, who worked for decades in Virginia State Parks system breaking barriers and making parks more accessible, was honored Saturday during the unveiling of a lodge named in his honor, along with two cabins, at Twin Lakes State Park in Prince Edward.

The ceremony dedicating the Bowen Lodge took place as members of Bowen’s family, park officials and friends looked on. 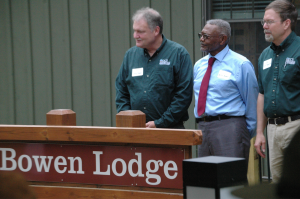 EMILY HOLLINGSWORTH | HERALD
Willie Bowen, center, stands with Craig Seaver and Eric Houghland, right, as the Bowen Lodge sign is unveiled. Bowen was honored at Twin Lakes State Park for his service to the park and his work as the first African-American district manager for the state park system, playing an integral role in the desegregation of Virginia State Parks.

Morgan described the history of Twin Lakes State Park, noting it was originally one of a few in the state that admitted African Americans, then called Prince Edward State Park for Negroes.

Bowen began working at the park in 1968, and over the years became Virginia State Park’s first African-American district manager.

“I really think frankly that doing this during that period of time was nothing short of heroic,” Morgan said of Bowen’s role in the desegregation of state parks system.

Bowen would become a manager with Holliday Lake State Park in Appomattox after his time at Twin Lakes.

Amid desegregation efforts creating tension in the 1960s and 1970s, Morgan described Bowen as someone who could approach anyone, noting that his helpful and knowledgeable demeanor played a role in not only integrating Prince Edward State Park — which would later become Twin Lakes State Park in 1976 — but also helping integrate the mostly-white attendance of Holliday Lake State Park.

Seaver shared fond memories of Bowen, describing how effortlessly he wore the many hats involved in being a park manager.

Seaver said park managers, often in the same day, have varying duties. They may impose fines for alcohol consumption in parks and then help bait the hook on a child’s fishing rod.

He said Bowen fit the bill for an ideal park manager.

“He is a pioneer, putting him in the right place and the right time to bring the park to the 20th century,” Seaver said.

Seaver made it clear during his remarks how much he learned from Bowen, highlighting his impact on Twin Lakes and Virginia State Parks.

“I never thought I would stand at this park for 32 years and learn so much from this man,” Seaver said.

Bowen addressed the audience, describing the then-Prince Edward State Park’s impact on the African-American population, a place Bowen said was “like home for us.”

Bowen said he was warned of potentially dangerous situations that could have arisen in the parks, perhaps in part due to racial tensions.

Bowen said he never ran into trouble — something he said has been consistent during his decades of service.

“I would do it all over again,” Bowen said.

After several members of the community were awarded for their services to the park — their plaques made with pieces of the siding used to build the lodge — Bowen and other community leaders unveiled the sign identifying the Bowen Lodge and performed a ribbon cutting.

Bowen retired from Virginia State Parks in 1999, but still continues to be active in the community.

After the ceremony, visitors and guests toured the lodge, now the park’s largest, with six bedrooms.

The two cabins beside the lodge each have three bedrooms, according to Morgan, who said there are seven two-bedroom cabins and a four-bedroom lodge in the park.