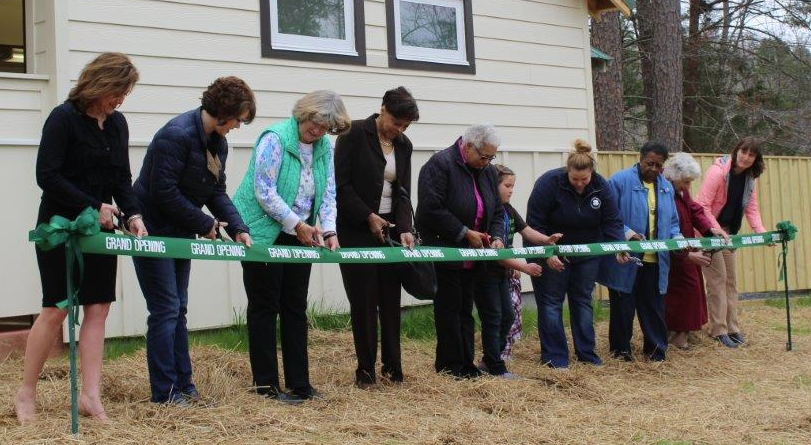 The Holiday Lake 4-H Educational Center celebrated its 75th anniversary on Thursday — one that included a ribbon cutting for a newly remodeled and expanded Works Progress Administration (WPA)-built girls’ bathhouse.

According to Tamara Lewis, the center’s administrative assistant of development, the celebration included a resolution from the Virginia General Assembly recognizing the center’s 75 years presented by Del. Matt Fariss’ office.

Lewis said stories from campers from decades past were enjoyed by those in attendance.

The center’s president, Preston Willson, said the bathhouse was built in the ’30s when the entire complex of cabins and the dining hall was built.

“The boy’s bathhouse had been renovated three or four years ago before, but we have done it now to the girls,” Wilson said.

Willson said the center was officially made a 4-H Camp in 1941 when the state was petitioned for a lease.

“The first lease was 19 acres — today that’s 187 acres,” Willson said. “It started with three or four local counties coming together for camp in the summertime.”

There are currently six 4-H centers in Virginia — Holiday Lake 4-H Educational Center being one of them.

According to the center’s website, the center has a fully equipped conference room, a full-service dining area that can double as a meeting room and rooms for smaller groups that seat up to 40 people.

According to its website, the center also has overnight accommodations in bunk house style for 130 people during colder months and 250 people during warmer months.

According to the website, the center has many recreational opportunities, including forest hiking trails, volleyball, tennis, basketball courts, a softball field, a junior Olympic swimming pool and covered picnic pavilion areas.