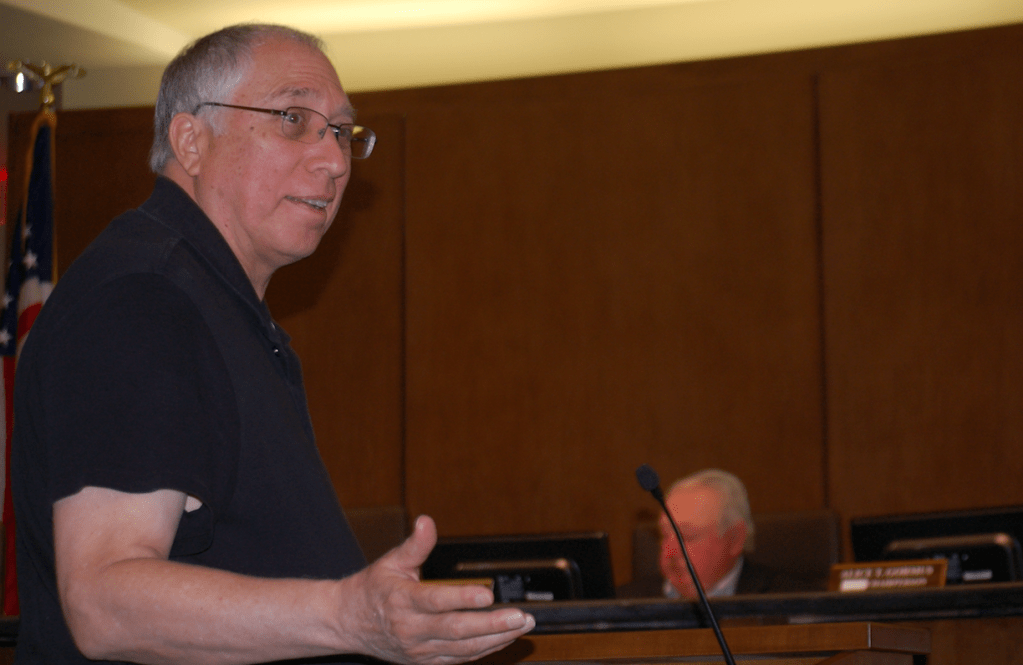 Following a public hearing, the Buckingham County Planning Commission voted 7-0-1 to recommend the county’s board of supervisors approve a special use permit that would allow Dominion Energy to erect a communications tower on the premises of a proposed 53,783-horsepower compressor station.

The station, which has been hotly contested among those living near its site, is slated to be constructed between Shelton Store and Union Hill roads on Route 56, and is part of a proposed 600-mile natural gas Atlantic Coast Pipeline (ACP) that would span Buckingham County.

District Seven Supervisor Danny Allen, who represents the board of supervisors on the commission, abstained from voting on the permit recommendation. He’s an employee of Dominion and has abstained from prior votes associated with the (ACP) project.

Dominion State and Local Affairs Representative Emmett Toms said the tower’s proposed location was moved 190 feet away from the property line in comparison to previous plans for it to be located on the edge of the property, citing the tower’s collapsible mechanism in the case of it being damaged.

The move was made, he said, to keep the tower from disturbing the adjacent properties in the chance that it collapsed.

The tower’s 195 foot height is shy of the Federal Aviation Administration requirements that require a light signal on top.

Toms said the tower would have space for local law enforcement to locate communications equipment. 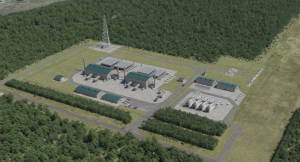 DOMINION
This rendering depicts what the 53,783-horsepower (hp) natural gas-fired compressor station, granted a special use permit by Buckingham supervisors, will look like once built. The station will lie between Shelton Store and Union Hill roads along Route 56.

A majority of the speakers during the hearing — all of whom said they were against the compressor station — spoke in favor of placing fiber-optic cable in the ground where the pipeline would be in order to give residents the benefit of fast, communicative capabilities.

Irene Ellis Leech, whose family owns a farm that would be bisected by the proposed 42-inch pipeline, said the company only agreed to staff the station for the first year of operation and it would be only remotely monitored from West Virginia afterward.

“We’ll be dependent upon extremely undependable wireless service subject to its inherent variable conductivity,” Leech said. “This will last for 50 years. They rarely update them after they put it in. If we do not get ACP to install fiber now, we are unlikely to get it later.”

“If we had fiber-optics in this county (we) would be much more educated, and the more educated we are the more likely we could attract decent industry not dirty, bloody industry like (the pipeline) is,” said Buckingham resident Heidi Dhivya Berthoud.

“We just had a fire a month ago at Yogaville and we lost a house … It took (the volunteer fire departments) 20 minutes to get here. They couldn’t save the one building, but they saved the other buildings in the neighborhood around them,” Yogaville resident Joseph Jeeva Abbate said.

Toms said the company proposed putting fiber in the ground with the pipeline originally with federal regulators responding they would be competing with other competitors of other cell towers.

“We’re kind of mixing apples and oranges,” Toms said. “This is a private tower for our use. It will have a microwave signal that will be sent back to our system in Bremo.”

Toms said they were restricted from putting fiber in the ground along the pipeline.

“We’re not in the fiber business,” Toms said. “We can put fiber in for our own use on our own facilities, but we can’t put it in for third parties, because we’d be competing with other telecom companies.”

County supervisors approved a special use permit for the compressor station in January with 41 conditions, including horsepower limits, emergency response, air quality studies and emissions tests, installation of fire breaks, a backup emergency communications system, compliance with the permit, staffing and use of silencers and noise. The staffing condition included one staff member to be on site 24/7 for the first year.

The winter 5-0-2 decision came after 76 people spoke during a public hearing on the permit application. Seven of the 76 spoke in favor of the permit while the remainder that spoke opposed the measure.

In late December, Federal Energy Regulatory Commission (FERC), which has regulatory approval of the project, released its draft environmental impact statement (EIS) regarding the proposed pipeline, concluding the project’s impact would be “less than significant.” The final EIS will be available in June.

The BREDL suit comes after farmer Carlos Arostegui, who owns Whispering Creek Farm, a 184-acre dairy and cattle farm along the route of the proposed pipeline, which lies about 2,175 feet from the site of the proposed compressor station, filed suit in early February, claiming the issuance of a special use permit for the station violated the county’s Zoning Ordinance.