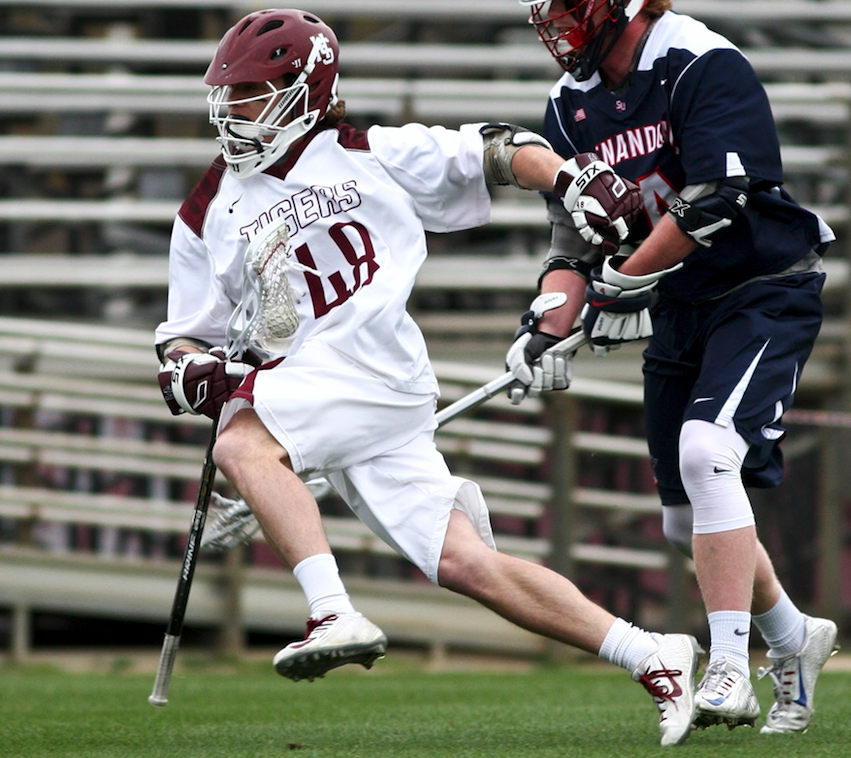 Hampden-Sydney College’s lacrosse team is off to a 5-3 start in its first season since the reins of the program changed hands from a retiring Ray Rostan to his son Jason Rostan.

As Tigers head coach, the elder Rostan had a historic 32-year run, during which he led them to a 302-172 record, including four Old Dominion Athletic Conference (ODAC) championships and eight NCAA Tournament appearances.

The younger Rostan served as an assistant coach under his father for the past 13 years, played for him prior to that and has been around the program since he was 4. But he now leads it as head coach, and he took a moment to share what that has been like.

“It’s been natural,” he said. “I think, for me, just to have a chance to grow up around it and see what my dad was doing every day, I just felt he had me really prepared for the ins and outs of it. He gave me a lot of responsibility my last few years as far as game-planning and that type of thing. But, yeah, the load is definitely on you. Everything comes back on you now, so that’s been a little bit different. Every decision is yours now. But it’s really been great.”

“I think the (University of) Mary Washington win was a great opening win for us,” he said, referring to the Tigers’ 13-9 victory in their season opener Feb. 11.

He noted the 13-12 road loss to The Catholic University of America on Feb. 22 was “kind of a tough pill to swallow,” and the 15-6 loss to visiting Cabrini University on March 1 was disappointing.

“Cabrini coming down here was a top-10 team,” Rostan said. “I really felt like we were going to play better in that game, and honestly, I don’t think we played our best that day.”

Christopher Newport University came to town to face the Tigers on Feb. 25, and “I think we played our best game of the season that day,” Rostan said.

He added that he and his staff challenged Hampden-Sydney’s defense to step up its game, and “we kind of mixed some man-to-man with some zone defense, and I think it really worked for us. We learned a lot that day.”

Struggling with consistency, the Tigers have been working on putting together a complete 60-minute performance, Rostan said.

Successfully leading the team on the field has been a senior trio consisting of defenseman Triston Stegall, defensive midfielder Bucky Potter and midfielder Jared Arntzen.

“Our three senior captains have just done a tremendous job of leading the team and been really vocal with the guys, which has been great,” Rostan said.

Juniors dominate the roster, which features 16 of them, a list that includes midfielder Chandler Shaheen, who leads the team with 21 goals.

“I feel like he’s one of the top middies in the ODAC right now,” Rostan said. “I think he shoots the ball as hard as anybody in the country.”

The coach also praised junior midfielder Hunter Brown, who leads the Tigers with 14 assists and is second on the team with 17 goals.

“Those two guys just work well together,” Rostan said of Brown and Shaheen. “I think our team, offensively, right now, really has gone as those two guys take us.”

Junior attackman Ian Levin, who led the Tigers with 43 goals last year, has been battling injury this year, but Rostan expects him to flourish soon when he returns to full health. He is third on the team with 15 goals and has nine assists.

The coach also made a point to highlight junior defenseman Kent Henry, who covers the opponent’s best player every game.

“Kent’s just been unbelievable on the defensive end for us,” Rostan said. “I think he’s having a kind of an All-American type of year, defensively.”

Hampden-Sydney’s goal at this point in the season, Rostan said, is to clinch the No. 1 seed in the ODAC tournament, allowing the Tigers to host the semifinals and final for the first time.

After hopefully winning the tourney, Hampden-Sydney’s sights would turn to the NCAA Tournament, an event Rostan said the Tigers have not been a part of since 2003, when he was a senior on the team.

The Tigers visit Shenandoah University on Saturday at 4 p.m.