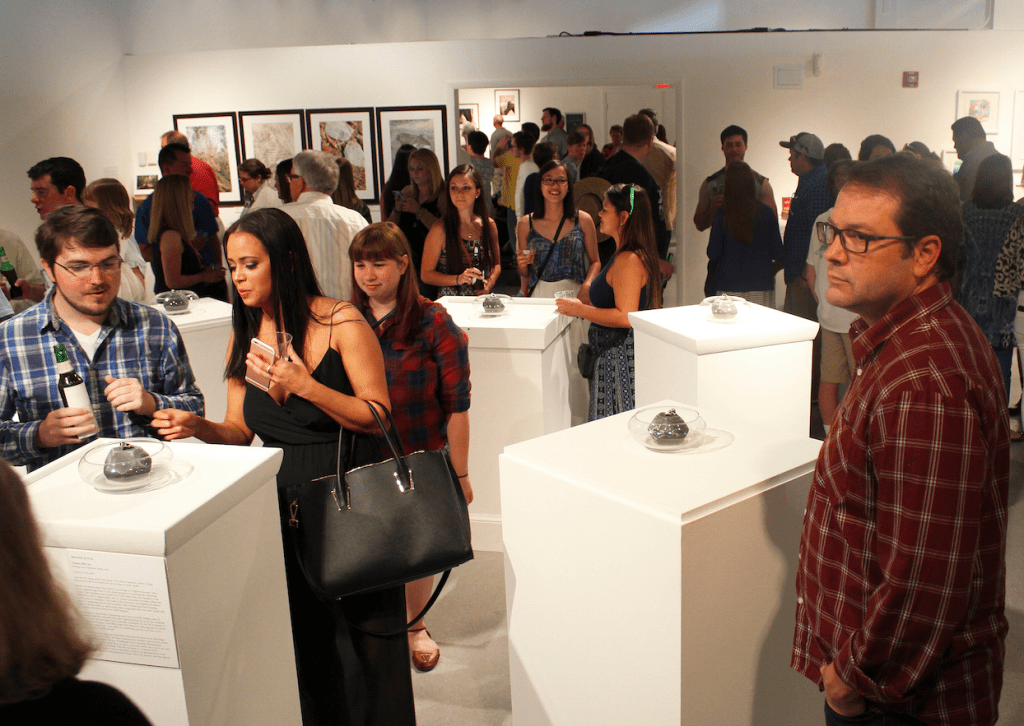 Members of the community filled the LCVA during the 2015-16 Point of Departure opening reception.

Each year, all Longwood University visual arts majors create a senior professional project that often forms the core of what will become their professional portfolio.

According to a press release, the Longwood Center for the Visual Arts (LCVA) has the privilege of presenting these culminating works.

“Point of Departure: Longwood University Department of Theatre, Art, and Graphic and Animation Design 2017 Senior Exhibition celebrates the beginning of the next stage of their life journey, the time they have spent at Longwood, and their growth as individuals, artists and citizen leaders,” LCVA officials said in the release.

“Being in the senior show is a way to final feel recognition for my art. I finally have somewhere that I can feel professional and show off my artwork to the public,” said Lindsay Manning, who majors in photography. “It is the perfect opportunity to put everything I learned at Longwood University into art pieces I truly care for and a subject that is something meaningful to me,” said Brittany Jones.

Emily Spittle, another graduation graphic design major senior, stated, “I’m extremely proud of how far I’ve come with this project. It’s helped me grow so much as a designer.” She said she couldn’t wait to see her work on display at the LCVA.

“In addition to having their work professionally displayed, the exhibition also presents a unique opportunity to students majoring in graphic design as it gives them the chance to create the promotional material for the exhibition. The student chosen for this opportunity was Erin Godwin, a graphic design major and a senior art director in Design Lab. Erin Godwin worked with Alison Cartte and Marika Smith to design the postcards and posters for Point of Departure through a program at Longwood called Design Lab, as intensive class used by Longwood’s Graphic and Animation Design department to prepare students for real-world design jobs.”

“I was thrilled to be given the opportunity to work on the marketing materials for the show. Being the selected designer to create a poster that represents the entire exhibition was a great honor,” said Godwin.

Instead of choosing a literal visual for the theme Point of Departure, Godwin chose to highlight the technical skills that students can gain from being in the various arts programs in the department. “My design was focused primarily on typography and is meant to showcase the graphic design aspect of the show, while still highlighting the ‘art’ aspect in the word itself and in the imagery,” said Godwin.

Point of Departure is complemented by Production and Vulnerable, which features ceramics created by visiting artists Nick Listo and Emily VanderMey over the course of the past academic year.

Production and Vulnerable are on view April 9-May 17, with an opening reception with the artists on April 8 from 5-8 p.m.