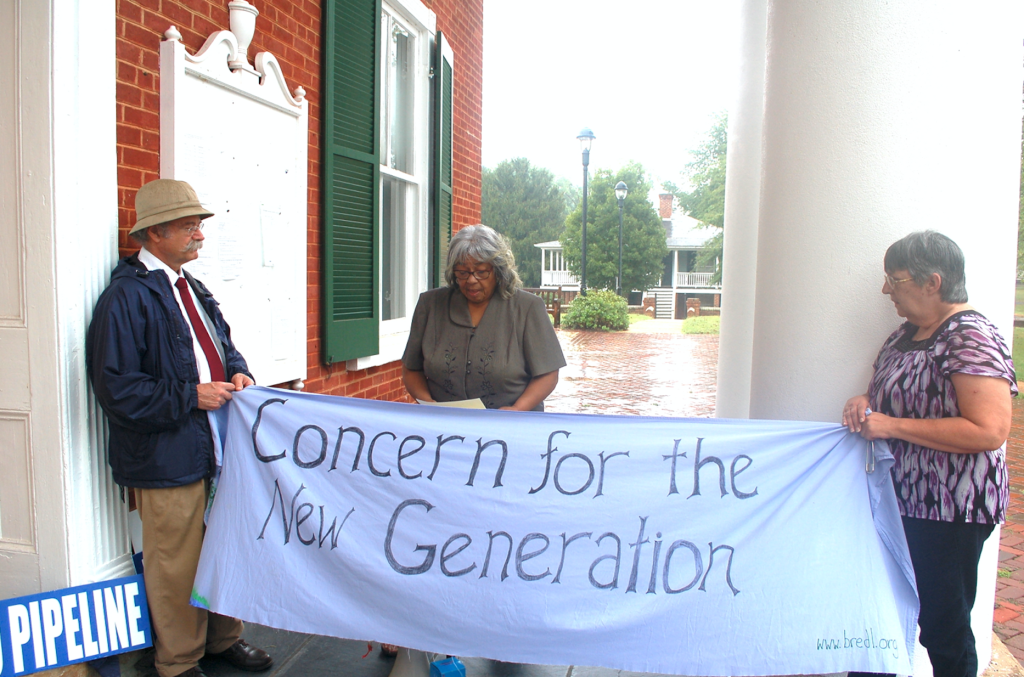 JORDAN MILES | HERALD Lou Zeller, executive director of the Blue Ridge Environmental Defense League, left, listens as Ruby Laury, middle, who lives near the proposed compressor station, expresses concern about the Atlantic Coast Pipeline project during a September press conference introducing Concern for the New Generation to Buckingham. Looking on is Sharon Ponton, right, a community organizer with the league. The league and others have filed suit against county officials in Buckingham.

The Blue Ridge Environmental Defense League (BREDL), its Concern for the New Generation (CNG) chapter and several Buckingham County residents have filed a civil lawsuit against county officials “seeking judicial review of the decision and action by the” board of supervisors in granting a special use permit for a 53,783-horsepower compressor station. 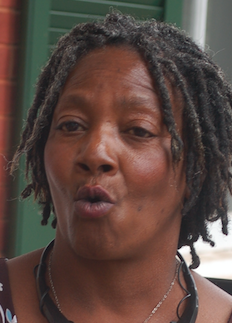 The suit stems from county supervisors’ January action approving the special use permit for the compressor station as part of the proposed Atlantic Coast Pipeline (ACP) — a project being led by Dominion — that would include a 42-inch natural gas pipeline spanning Buckingham County.

The legal action was filed March 8, according to a release from BREDL.

“The (BREDL) and CNG seek to reverse the decision by the board of supervisors to permit the industrial facility in the residential and agricultural Union Hill community,” officials said in the release. “Attorney James Ghee, of Farmville, represents the organizations.”

The filing represents one side of a legal argument.

“Appellants aver that a true controversy exists and that the Special Use Permit was issued contrary to existing zoning law,” the suit states. “Further, action by the Board was arbitrary and capricious. Therefore, Appellant files this Petition seeking adjudication by this court that the special use granted by the Board be declared null and void.”

In the 20-page filing, appellants allege the board’s action in issuing the permit for the station in an A-1 Agricultural District “was an unreasonable and arbitrary use of its authority which bore no substantial relationship to the public health, public convenience, or good zoning practice. Rather, it was a discriminatory act for the benefit of a private entity and detrimental to residents of the county as a whole. Therefore, it is unlawful and should be deemed … invalid and void.”

The compressor station is sited for a parcel of property along Route 56 between Shelton Store and Union Hill Roads.

The suit comes after farmer Carlos Arostegui, who owns Whispering Creek Farm, a 184-acre dairy and cattle farm along the route of the proposed pipeline, which lies about 2,175 feet from the site of the proposed compressor station, filed suit in early February, claiming the issuance of a special use permit for the station violated the county’s Zoning Ordinance and the permit was “unreasonable, arbitrary, capricious, and not fairly debatable.”

His suit requests the court declare the station’s special use permit void.

In January, the permit was approved with 41 conditions, which address a wide variety of topics related to the station, including horsepower limits, emergency response, air quality studies and emissions tests, installation of fire breaks, a backup emergency communications system, compliance with the permit, staffing and use of silencers and noise. Conditions include a minimum of one employee, contractor or third-party security staffer being present onsite 24/7 during the first year of operation, installation of a backup system for monitoring communications and emergency notifications, a third-party firm conducting air quality studies and emissions tests, development of a crisis response plan, the collapse of structures within subject property lines and grass or gravel fire breaks between the facility and adjacent properties.

“The issues raised in the lawsuit center on the threats to public health from excessive noise and the disproportionate impact the compressor station would have on a well-established historic African-American community,” BREDL officials said in the release.

“Zoning laws do not allow a county to brush aside these concerns,” said BREDL Executive Director Lou Zeller. “This was the board of supervisors’ biggest mistake. We will show that, under the law, a compressor station cannot be placed in an agricultural community.”

According to the release, “the suit shows that for five weeks a year, the plant would be subject to no noise limits at all.”

“We voiced our concerns at every public hearing the county held, but did they listen to us? No!” Mosley, co-chair of CNG, said in the release.

“The (BREDL’s) lawsuit is based on Virginia zoning law which is designed to protect residential areas from encroachment by heavy industry and provide ‘healthy surroundings for family life,’” league officials said. “Also, state law specifically requires that the ‘development of new energy resources does not have a disproportionate adverse impact on economically disadvantaged or minority communities.’” 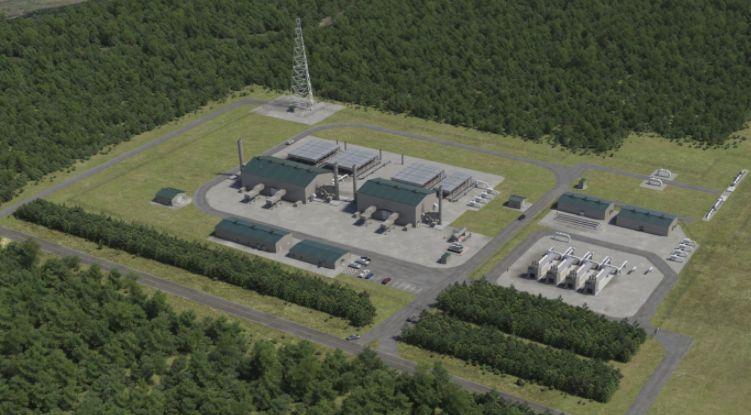 DOMINION
This rendering depicts what the 53,783-horsepower (hp) natural gas-fired compressor station, granted a special use permit by Buckingham supervisors, will look like once built. The station will lie between Shelton Store and Union Hill roads along Route 56.

According to the suit, permit condition No. 6 “allows the proposed compressor station to generate excessive noise at the property line or any adjacent building. The level of noise pollution caused by normal operations would be from two to four times as high as the normal day or night sound levels in a rural area. Moreover, Condition (No.) 6 allows the facility to operate with no noise limit whatsoever for five weeks per year, twenty-four hours a day.”

“Condition (No.) 18 states that silencers shall be used during the blowdowns but fails to state a noise limit … The Board failed in its legal obligation to ensure that the community would not suffer disproportionate impacts on minority and economically disadvantaged residents,” the suit reads.

According to Dominion External Affairs Manager Carla Picard, the compressor station will be “one of the best stations in the system,” citing there are 109 compressor stations in six states that Dominion operates. During a previous board of supervisors’ meeting, Picard said the station would be “highly regulated” with “layers of additional vigor,” citing the conditions placed on the permit application.

Calling the intersection with Transco Pipeline “very important,” she cited a study where the residence closest to the station, with all four engines running, would only hear an increased sound of 2.9 decibels. The sound emitted from the station at the residence is below the 55-decibel federal limit.

In late December, the Federal Energy Regulatory Commission (FERC), which has regulatory approval of the project, released its draft environmental impact statement (EIS) regarding the proposed pipeline, concluding the project’s impact would be “less than significant.”

According to the suit, an air permit from the Virginia Department of Environmental Quality for the proposed compressor station “requires a certification of compliance with Buckingham County ordinances. Pursuant to Virginia law, a Local Governing Body Certification Form must be signed by a local official certifying that a proposed industrial facility conforms to all local ordinances … On September 8, 2015, the Buckingham County Administrator, Rebecca Carter, signed and submitted the Local Governing Body Certification Form to Virginia DEQ. This certification was delivered one year before the Planning Commission held a public hearing on the matter, and sixteen months before the Board of Supervisors approved (the) Permit.”

The suit alleges ACP LLC requested the special use permit under “the Public Utility Exemption in the A-1 Zone ordinance. To qualify for this exception, a facility must be a public utility. However, the compressor station proposed by (ACP) LLC is not a public utility … (ACP) LLC is not listed on the Virginia State Corporation Commission’s website as a regulated gas utility.”