Dr. Robert Sabbatini was officially hired as dean of students at Hampden-Sydney College (H-SC) on March 1.

He had been serving as H-SC’s interim dean of students since early February. Prior to that, he was the school’s associate dean of students, a position he was hired to June 1, 2015.

With the interim status removed from his title, he said that it is a “wonderful, exciting experience to be named dean of students here. I’m very much excited, really enjoy working with our student body — excellent group of young men and can’t say that enough. … some of the most dynamic young men that I’ve had the pleasure of working with.”

H-SC President Larry Stimpert said Sabbatini has been a leader in all facets of the college’s student life program since June 2015.

“Robert brings more than a decade of experience in student and residence life roles to this position, having previously served as dean of students at Lincoln Memorial University in Tennessee,” Stimpert said. “He is a dedicated leader and a tremendous mentor for our students, and I am thrilled that he has agreed to serve as dean of students at Hampden-Sydney.”

Sabbatini said he filled a variety of roles at Lincoln Memorial, starting in August 2008 as the director of student activities. From there, he moved up to director of housing and residence life. He said he dabbled in admissions for a while, was named assistant vice president of enrollment management and student affairs, and he served as dean of students from June 2011 to May 2015. 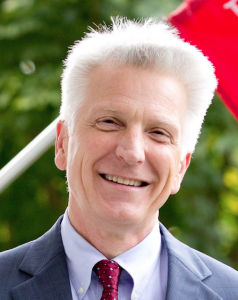 The position of dean of students at Hampden-Sydney became open in early February after the abrupt resignation of David A. Klein.

An H-SC alumnus who had worked at the campus for more than 25 years, Klein told The Herald that Provost Dennis Stevens let him know that Stimpert wished to bring in his own dean of students. Klein said he was given the opportunity to remain there until June but “that seemed a little hard to do. …”

A group of more than 70 students peacefully protested the resignation, expressing their respect and admiration for Klein. Some said he should be reinstated or at least given a proper send-off, and it was also noted that very little information was given to students explaining the resignation.

Stimpert addressed the students, praising them for their support but also asking them to trust him.

Now approximately a month and a half later, Sabbatini said his transition into the dean of students position has been “very smooth. The staff has been, of course, very supportive. … I’ve been here a year and a half and already have, I think, a very good relationship with all of them, working relationship. That’s my style — continue to move forward.”

At Hampden-Sydney, with the move up from associate dean of students, Sabbatini said his responsibilities will broaden in supervision of different functions and areas on campus.

“I’m very hands on,” he said, adding that he enjoys getting out of the office to walk the resident halls, working with resident assistants and the student government group. “I’m not one to sit at a desk, if you will.”

look at creating the whole individual, the whole student. And a meaningful part of college education is the learning that is obtained from learning and interacting with others. I truly believe that.”

Sabbatini already has some projects in the works that will aid in fulfilling this vision, including a bicycle initiative on campus.

“We’ve actually already purchased 15 bicycles, and those range from traditional mountain bikes to cruisers,” he said. “The goal behind that is to give students, faculty and staff the opportunity to check out a bicycle for a 24-hour period of time or 48-hour block of time over the weekend and to utilize our campus — the trails that are around campus — and really promote a healthy lifestyle in regards to that.”

He said another objective is to expand the Outdoor Adventure program, and he also added that he quite enjoys working with faculty to help form co-curricular activities.

“I think that relationship should be very strong between student life and the faculty on campuses,” he said.