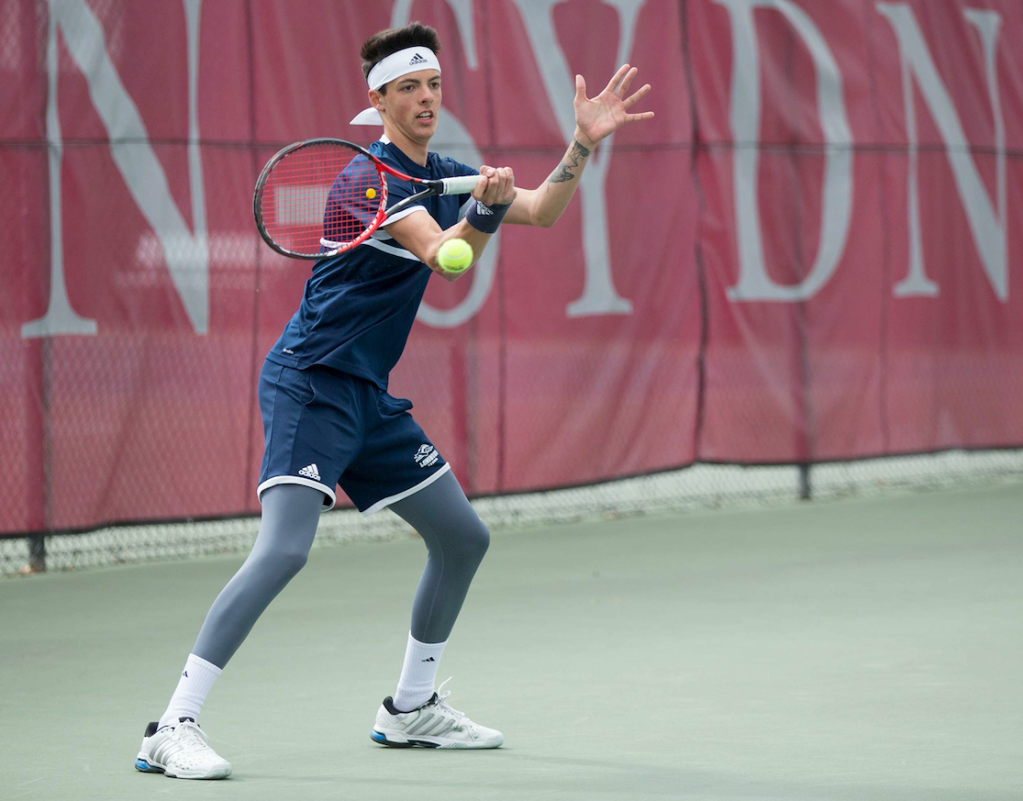 MIKE KROPF | LONGWOOD UNIVERSITY Longwood University freshman Amadeo Blasco has dropped only one match in 12 singles contests this season while playing in the top half of the lineup.

Prior to this season, the Lancers were a whopping 0-32 in Big South Conference matches, making it unsurprising that the Lancers were selected last in the 2017 Big South preseason polls. But Tafelski and his team have undoubtedly surprised everyone by accumulating a 3-1 conference record and storming to third place in the Big South rankings.

“We got off to a great start. There’s not much more you could ask for during this start,” said Tafelski, who was the 2014 Intercollegiate Tennis Association National Assistant Coach of the Year. “Pulling off these three conference wins by 4-3 scores — which means a lot of little things could’ve gone either way — shows it isn’t luck; it means that they’ve been doing things the right way.”

Things certainly have gone the right way, as the Lancers have compiled an overall record of 9-3, Longwood’s winningest season since joining the Big South in 2012. Tafelski correlates the unpredicted surge in wins to a dramatic culture change.

“What comes with a successful and winning program is a strong culture that involves strong values and standards,” Tafelski said. “They have to understand that it’s not a one day type of thing, it’s hard work every day, and they have to train every day like they’re trying to achieve their goals.”

Senior Florian Uffer said the “standards and guidelines” have drastically changed since Tafelski took over the program. Uffer said before Tafelski was hired, the team used to practice only about three times a week, sometimes less if it was too cold or too windy. The lack of discipline within the program led to the team struggling to put together wins.

“Before Coach (Tafelski), when we would face a challenge, we would give in and just accept the fact we had a tough day,” said Uffer, the 2016-17 team captain. “Coach (Tafelski) told us not to accept losing no matter how you feel, no matter if you’re not playing well and no matter the conditions.”

Under Tafelski’s guidance in the 2015-16 season, Uffer compiled a 10-8 singles record at No. 2, a major improvement from his 3-9 record the previous season. Currently, Uffer sports a 5-2 singles record at No. 1, but his most impressive win came when he was playing at No. 2 against preseason poll favorite Winthrop University on March 11, clinching the team victory in a dramatic third set, 7-5.

“We have a lot of really young guys in the lineup,” said Uffer, the eldest player in the starting lineup. “But the fact that they adapted to the team mentality really quickly is definitely a big factor for our success this year.”

Out of the players in Tafelski’s first recruiting class, true freshman Amadeo Blasco has been nearly unbeatable in singles play. Blasco has spent the season in the top half of the lineup and accumulated a stunning 11-1 record, which ranks him second in the Big South amongst all singles players. Blasco’s match-clinching three-set win against Liberty University for Longwood’s first-ever Big South victory March 2 helped nab him a Big South Freshman of the Week accolade.

The rest of Tafelski’s recruiting class and roster has certainly held its own. Junior Jorge Gomis, a junior college transfer, and freshmen Noah Petralia and Arthur Bardellotto have a noteworthy cumulative 17-13 singles record. Sophomore Julian Farthing, who was not recruited by Tafelski, is continuing his stellar college career with a notable 8-2 singles record. Farthing is 6-1 in play at No. 3, which ranks him first in the Big South amongst No. 3 players.

Although the Lancers are off to an incredible start, Tafelski understands the three remaining conference matches will be tough. The Lancers will face crosstown rival Hampden-Sydney College on Thursday at 4 p.m. before traveling to Boiling Springs, North Carolina, to face conference foe Gardner-Webb University on Saturday at 2:30 p.m.

“I’m proud of what these guys have achieved this year and how they’ve been getting better every week,” said Tafelski. “It’s just the beginning, so we have to focus every day to keep doing what we’ve been doing and keep them hungry.”