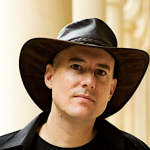 The title of LaMotte’s talk is drawn from his most recent book, which is being used as a textbook in several colleges and universities in the United States and Australia. He has offered “Worldchanging 101” workshops around the world for more than a decade.

LaMotte is a former Rotary World Peace Fellow; cofounder and president of the nonprofit PEG Partners, which works with schools and libraries in Guatemala to promote literacy, critical thought and artistic expression; and recently completed his sixth and final year on the AFSC Nobel Peace Prize Nominating Task Group. His books, which include adult and children’s literature, examine justice issues and creative, practical approaches to large scale problems.

A singer, songwriter and musician for more than 25 years, LaMotte has released 12 full-length CDs of primarily original music and performed more than 3,000 concerts in all 50 states and on five continents. BBC Radio Belfast has praised his “charm, stories, humor, insightful songs, sweet voice and dazzling guitar ability.”
A brief reception will follow LaMotte’s talk, which is the 2017 Simkins Lecture. This lecture series, established in 1979, honors Dr. Francis Butler Simkins, a historian who was one of Longwood’s most eminent faculty members. The Southern history specialist taught at Longwood from 1928 until his death in 1966.