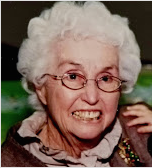 She was a current member of Farmville Baptist Church, Farmville. Iris served in the Army Air Corp during WWII.

She is survived by son, Larry A. Lehman, Sr. (Debbie), of Chase City; granddaughter, Wendy Lehman Tillett (Paul), of Cumberland, two great-granddaughters, Holly and Samantha of Cumberland; and several nieces and nephews.

A private graveside service will be held at Westview Cemetery in Kinston, North Carolina later this month.

Online condolences may be expressed at www.newcomballgoodfh.com.

Newcomb Allgood Funeral Home, of Chase City is in charge of the arrangements.