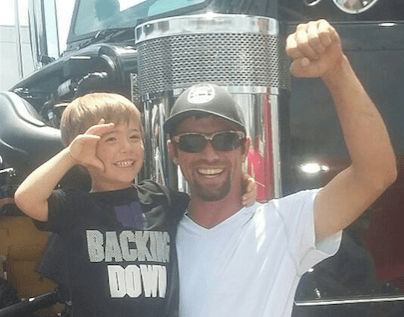 Twenty seven-year-old Lance Dandridge, “had a heart of gold,” according to his mother, Angie Edwards. Lance died in a single-vehicle accident on Chellowe Road on Friday. Here, he poses for a photo holding his son, three-year-old Aiden.

Family and friends of the late Lance E. Dandridge, of Arvonia, who died in a single-vehicle accident Friday evening, are remembering him as someone who “had a heart of gold.”

“He … would do anything at the drop of a hat for anyone that needed it,” said Angie Edward, Lance’s mother, “and never hesitate or ask for anything. He was funny and had a smile that would light up the room.”

According to Virginia State Police, Lance’s 2004 Ford F-150 was traveling east on Chellowe Road Friday, about one mile west of Ca Ira Road, when it ran off the right side of the road into a field, “overturned and caught fire. Speed is believed to have been a factor in the crash,” police said in a press release.

The 27-year-old father was pronounced dead at the scene.
According to Edwards, Lance loved to hunt, fish, listen to music, sit around bonfires and shoot his guns.

The 2007 Buckingham County High School graduate had one son, three-year-old Aiden. “That was his mini me and was the sparkle in his eyes,” Edwards said of her son and grandson.

“Lance spent most of his time hanging with his family and friends when he wasn’t working,” his mother said.

“He worked for Joe Steinruck doing fencing and other related jobs. He would complain about his job, but really he loved it and he thought the world of Joe. His boss was so good to him; Lance had so much respect for Joe,” Edwards said.

In addition to his mother, Lance is also survived by his wife, Rachel, and his step-father, Walter “Junie Bug” Edwards, who helped raise him, playing a very large part in his upbringing.
“When Lance’s wife and son were happy, he was the happiest,” Angie said. “Lance loved his family so much and always wanted to please everyone. He was a hard-working, humble, caring, loving soul who always searched for a happy time. He was loved and liked by anyone who came in contact with him.”

Angie said her son’s personality “was huge. He loved with his whole heart and had a bond with his brothers that was out of this world.”