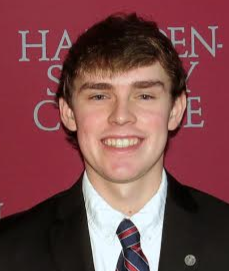 Hampden-Sydney College (H-SC) reported that H. Carter Cole, a freshman at the school, died suddenly over the weekend.

As described in the H-SC press release, “Carter was an outstanding young man, a loyal teammate, friend and brother. The Hampden-Sydney community mourns his loss, and our thoughts and prayers are with his family.”

The release didn’t offer the student’s cause of death.

The release noted that Cole, who was from Jeffersonton, was a member of the Hampden-Sydney swim team and the Alpha Chi Sigma fraternity.

A memorial and candlelight vigil honoring Cole’s life is being organized, and further details will be announced when they are finalized, H-SC officials said in the release.

The release also highlighted the counseling services to individual students that are available on an immediate basis, free of charge, in the college’s Wellness Center. Group counseling sessions were held at two different times Monday.
“We must all support each other in this time of grief,” the release said. “Please keep the Cole family in your prayers.”