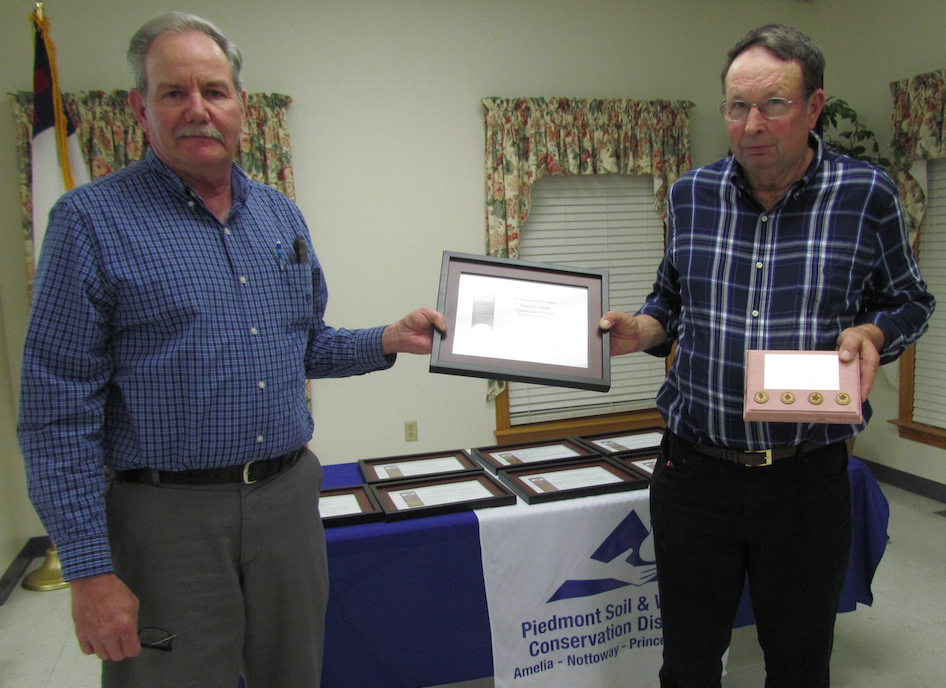 The Piedmont Soil and Water Conservation District honored Danny E. Glenn for his work to protect the state’s soil and water quality during its annual awards banquet held Tuesday, Feb. 28 at the Amelia Baptist Church.

“The house where Glenn’s great-grandmother lived and died is still standing on the land where he and his family now farm. Glenn View Farm has expanded to include several other properties that connect to or are close to the original tract, creating a meaningful legacy for the family.”

According to the release, Glenn grew up milking cattle on the family dairy farm, but transitioned into growing tobacco after finishing his education. “Growing tobacco was the main staple of the farm for over 40 years. To dry and store the tobacco Glenn built a large barn, and its red roof and spectacular view of the mountains is a landmark in Prince Edward County.”

After the tobacco buy-out, Glenn View Farm completely transitioned into the beef cattle business, according to the release.

“With the help of his natural resource partners, Glenn converted 50.4 acres of his tobacco cropland into grasslands, successfully reducing the erosion that is a natural consequence of raising crops.”

“Glenn has invested considerable time and money to create safe cattle handling facilities and conservation friendly rotational grazing systems on the seven farms that he currently operates. With the technical and financial assistance of his natural resource partners, and the assistance of his son and a hired hand, Glenn installed 13,145 feet of cattle exclusion fencing and planted tree seedlings in a 3.2-acre Conservation Reserve Enhancement Program streamside buffer designed to protect the streams from erosion and create wildlife habitat.”