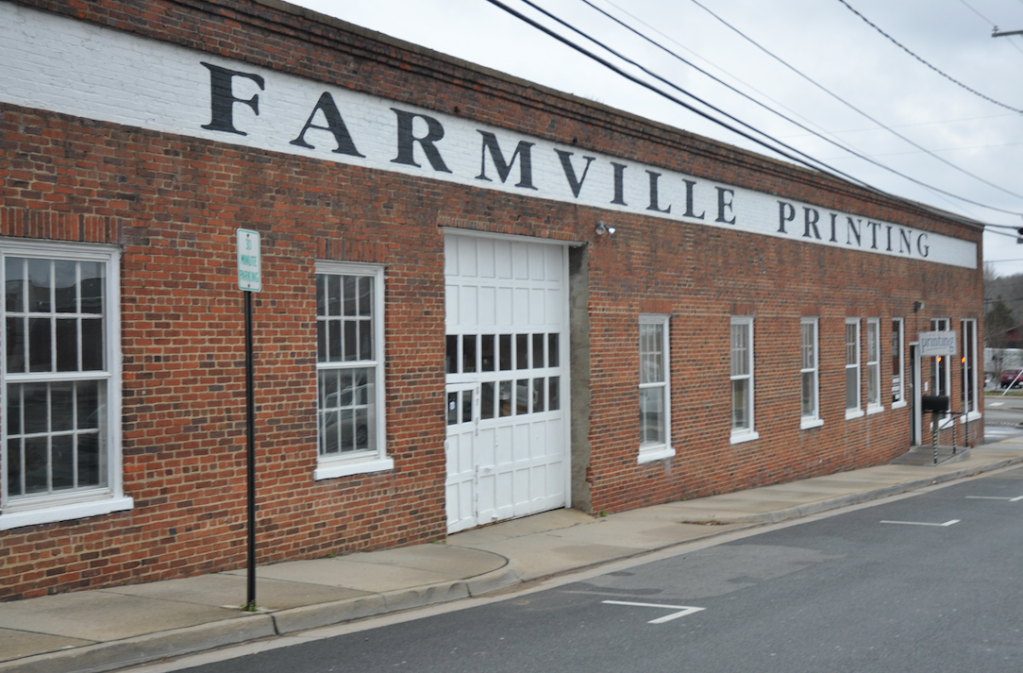 JORDAN MILES | HERALD Farmville Printing, located on North Street across from The Herald and WVHL Radio Station, will move to 717 E. Third St. on May 1. The business has been purchased by Jim Garrett.

Garrett said though the business will move to Kinex’s location at 717 E. Third St. in Farmville, he’ll continue to operate it as a print shop.

“Officially, it’ll be May 1,” Garrett said in an interview with The Herald. “We’ve put together an interim agreement, and if somebody didn’t do something right away then a lot of the business would be lost and people would be out of jobs and we’d be sending more money out of Farmville to other communities. I was kind of stressed about that, actually.”

Before Garrett agreed to purchase the business, it was slated to close March 17, according to a sign posted on the front door of the business, located on North Street across from WVHL Radio Station and The Herald.

“The Wall family has owned and operated Farmville Printing since J.B. Wall bought The Farmville Herald in 1921,” said Steve Wall in a statement. “I truly hate to get out of the printing industry, but our revenues had been declining and in order to maintain consistent growth, there needed to be changes which we were not particularly well-suited to make,” Wall said.

Steve Wall served as publisher of The Herald until 2015, when the newspaper was sold to Boone Newspapers Inc.

“Jim can expand into the digital field and grow the business by building on our foundation and reputation,” Wall said in a statement. “Dan Dwyer is going on with Jim and he brings three decades plus of experience in operating a commercial print shop. Our employees believe in customer service and customer satisfaction.”

According to its website, Farmville Printing has “always lightheartedly proclaimed ‘we print everything but stamps and money,’ but over the years, we have broadened our services even further, tackling high-end design, website design and writing and editing.”

“In 1976 I joined the Army and left here because I couldn’t find a job,” Garrett said. “Jobs are hard to come by and … as I was getting out of the military, I started a company called Heart of Virginia Communications, HOVAC.com, just to employ myself and create jobs. Then I sold it to nTelos.”

“I’m just at the point where I don’t think we should be losing jobs in our community,” he said.

Prefacing he’s been in technology since he was young, Garrett said he’s watched Farmville Printing “and Steve’s been a friend for years, and I’ve wondered why doesn’t somebody take it to the next level with building the web pages and putting it online where you can actually go online and buy your business cards and stuff. It’s nice for the personal touch, which is wonderful and we absolutely need that, but the business should have been evolved at least a decade ago.”

“It’s going to be a print shop, but it needs to be more than a print shop,” Garrett said. “Printing has declined. I feel very confident that the decline, the bulk of the decline is over with.”

“It struck me,” he said of when he heard the business was closing. “It really struck me that people were going to lose their jobs, and the more I talked to Steve the more emotionally involved I became.”

Garrett said he’s set “timelines that I want to have in place for being able to order business cards and invitations and greeting cards and Christmas cards and all types of things like that online. We’ve got a lot of companies around Farmville that are going to VistaPrint to do little simple things because it’s convenient.”

“We need to find out where the money is leaving this town to other vendors and bring it back into town,” he added. “We can grow some employees and really help the town overall.”

Garrett’s ownership will be effective May 1.

“Hard printing is not dead,” he said. “We’re doing some renovations up here in some of our (Kinex) space to move some of the equipment in and the people will join us in the offices and we’ll set certain timelines and if we meet those timelines and things go well, then we’ll be looking for a separate space for it.”

Garrett, calling the purchase “a golden opportunity,” said his main goal was to save jobs and continue the services the business offers the community.

Currently, about eight people work at Farmville Printing, Garrett said. “It looks like we’re going to be able to save about six of the jobs.”