The incident, reported Feb. 24, resulted in the arrest of Andrew T. Ainsworth, according to VSP spokeswoman Corinne Geller. 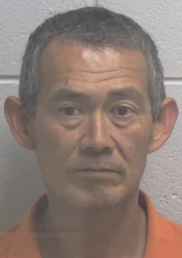 The incident began at about 8:24 p.m., Geller said, when Ainsworth’s Toyota FJ Cruiser approached a checking detail on Route 20 near Scottsville and refused to stop for police.

“The pursuit continued through the county when, at Woods Road, the Toyota slowed a bit, and a passenger jumped from the vehicle,” Geller said. “The Toyota then sped off. The Toyota eventually left the road and continued through a field, striking several gates and a gate post. The Toyota finally came to a stop in a wooded area near Glover Road. The driver then attempted to flee on foot but was apprehended without any further incident by the trooper and sheriff’s deputies.”

Geller said the adult male passenger was not injured when he jumped from and rolled away from the vehicle. “The two men are acquaintances. The abduction charge stems from the passenger repeatedly demanding to be allowed out of the vehicle during the course of the pursuit and Ainsworth refusing to stop and let him out,” Geller said.