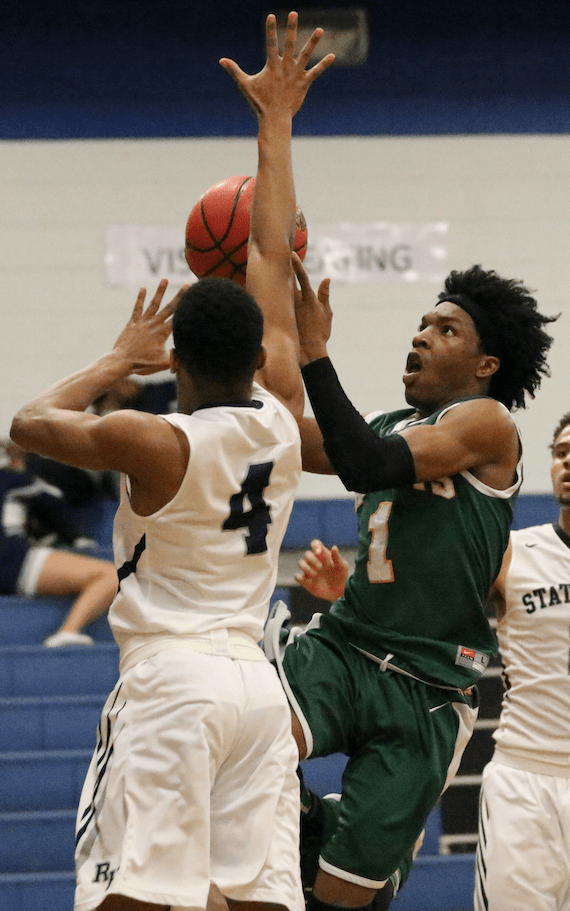 Buckingham County High School senior guard Antonio Chambers commanded the respect of coaches in the 2A West region, and they voted him to the 2016-17 all-region first team during the selection meeting Monday in Dublin.

“We’re talking about half of the state,” Knights Head Coach Russ Gowin said, referring to what Region 2A West represents. He noted coaches in the region “had to pick out of 32 (all-conference) first-teamers from four different conferences, so I was real pleased that (Antonio) ended up one of the top (players). He just had a fantastic season.”

Chambers helped Buckingham recover from a 1-5 start and finish the regular season 10-10. The Knights ended up with a 10-11 record after falling 70-55 against host Chatham High School in the Courthouse Conference 37 tournament semifinals.

Gowin said Chambers was solidly in the middle of the first-team all-region pack in terms of votes from coaches, with his stats helping recommend him as a worthy recipient of votes.

“He averaged 23.2 points a game, which was the second-best in all of the 2A West,” Gowin said. “There was one kid from Gate City (High School) that averaged 29, and he was the (regional) Player of the Year.”

The Gate City player is junior Mac McClung, who has played for the Blue Devils varsity squad since his freshman season.

Chambers was experiencing his first taste of varsity play this season. In addition to shooting 50 percent from two-point range, going 126-for-252, he also averaged 5.9 rebounds, a team-high 3.0 steals and 2.3 assists per game.

Helping account for why Chambers made the all-region first team despite Buckingham not reaching the regional tournament, Gowin said he stressed to other coaches that Chambers had big games against good teams.

“He scored 42 at Amelia (County High School),” Gowin said. “He scored (21) against Amelia at home. So, he averaged (31.5) points a game against Amelia, and they’re playing for the state championship.”

Chambers averaged 25.5 points in two games against Prince Edward County High School, and he scored 29 against Chatham, which was among the eight 2A teams in Virginia to reach the state tournament.

Players selected to the all-region first team for 2A West and 2A East are eligible for further honors.

“Those names will be put together in a couple weeks and (coaches will) pick an all-state team, so we’ll see where (Antonio) falls on that,” Gowin said. “Hopefully, he’ll get first or second team all-state.”