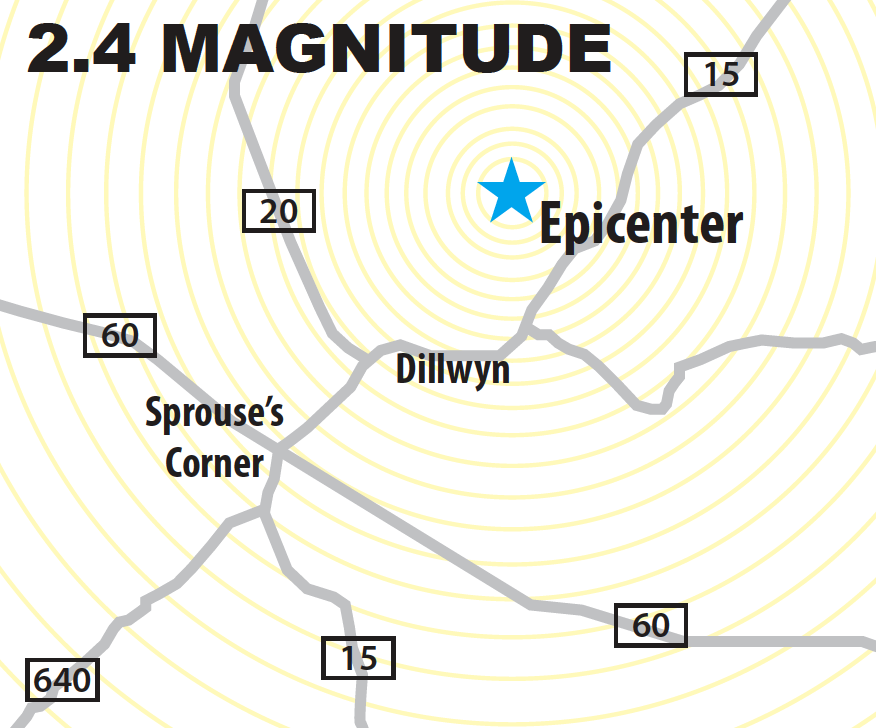 The epicenter of the earthquake, indicated by the star, was between U.S. Route 15 and Buffalo Road.

A small 2.4-magnitude earthquake — with the epicenter one mile north of the Buffalo Road and Cotton Alley Road intersection — occurred at 7:03 a.m. Wednesday in Buckingham County.

According to the United States Geological Survey (USGS), the earthquake had a depth of 8.1 kilometers.

According to Buckingham County Emergency Services Coordinator Kevin Flippen, there were numerous accounts of people feeling the earthquake, but no damage reported.

“This (earthquake) is very minor,” said Don Blakeman, a geophysicist from USGS. “People felt it, but that’s about it. I would never expect damage from an (earthquake) this small.”

“We were waiting for the school bus inside our house,” said Andrea Jon Somers, of Arvonia. “(We) heard a rumble. Felt the shaking of the floor … Strong shake at first, then faded, followed by a thunder sound.”

“I’m originally from San Francisco, so didn’t feel a thing,” Buckingham resident Jeanette Rivero Neville posted on The Herald’s Facebook page. “I did wake up but thought it was a loud truck,” she said.

In November 2015, a slightly larger 2.6-magnitude earthquake — with an epicenter along U.S. Route 15 northeast of Dillwyn and southwest of Thomas Road near Rocky Mount Road — rattled Buckingham.

Randi Perry Wright, of Sheppards, said she and her daughter were preparing for school when the earthquake occurred.

“We didn’t feel anything but heard it,” she said. “(It) sounded like somebody hit the side of the house,” Wright said. “Right after it happened, we both looked at each other from down the hall and asked, ‘What was that?’”

Sarah Crawley Brooks, of Rice, said she heard it more than she felt it in Rice, and she said it sounded like a loud series of booms.

“Lord, Jeffrey, I hope you’re okay,” Virginia Kay Marron added to the thread of comments to the story on The Herald’s Facebook page.

The USGS said earthquakes in Central and Eastern United States, although less frequent than in the West, are typically felt over a much broader region.

The Central Virginia Seismic Zone stretches from Richmond to Charlottesville and encompasses much of the Piedmont region of Virginia.