This annual event, sponsored by The Richmond Times-Dispatch and the Library of Virginia, offers an opportunity to watch students from elementary through middle school compete for the chance to represent their division at the state competition.

Woodson won the event for the second straight year. Chance is the son of Bridget Woodson. He will travel to Richmond on Saturday, March 11 to compete statewide. The event took place at Buckingham County Middle School. 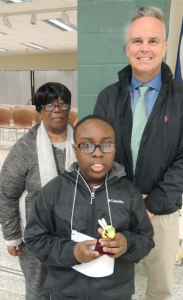