Saunders takes icy plunge for others 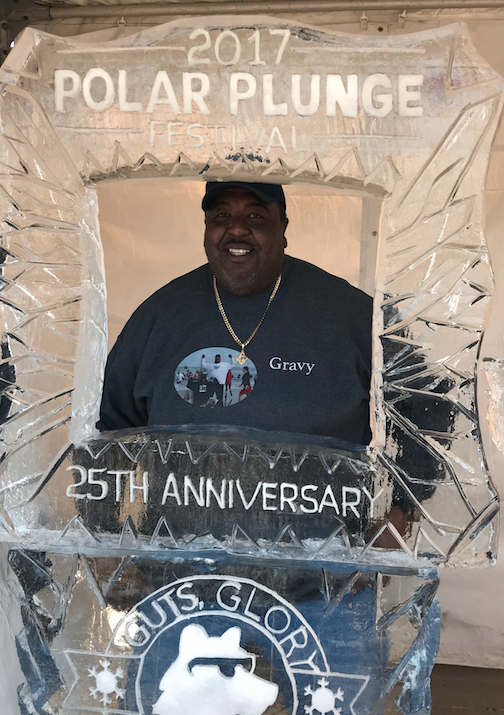 Robert Saunders has taken the plunge into a life dedicated to serving others.

Saunders, known by his friends as “Gravy,” is a regular participant in Virginia Beach Polar Plunge events, where he enters the water in the coldest part of winter to raise money for nonprofit organizations and groups.

The event, which is held throughout the state, raises funds for Special Olympics of Virginia.

“A lot of people in local area donated to the cause,” said Saunders, a resident of Cumberland County.

He said his family and friends help support his mission to give back to the Special Olympics — a cause that’s been close to Saunders’ heart since he first started participating with Special Olympics events through his job at Buckingham Correctional Center.

While participating in events through his job, Saunders was awarded the Kenny Fields Memorial “Unsung Hero” Award for his contributions to the Virginia Law Enforcement Torch Run, another event where raises funds and awareness for Special Olympics of Virginia.

He remembered fondly being notified of the honor while on vacation in Myrtle Beach for Bike Week. He cut his vacation short to receive the award. He said it was worth it and is proud of the honor.

Saunders’ family and friends have supported him each year. In particular, he said, his wife, Demetria, helps him raise money.

This year, the water was 17 degrees when Saunders took the plunge. “That’s the coldest one I’ve ever done,” he said.

Just recently, on Jan. 31, Saunders retired from his job at the correctional center. However, he said he isn’t yet ready to retire from Polar Plunges.

Saunders said he’s going to keep participating in the plunges as long as he can. “As long as my age doesn’t slow me down,” said Saunders.

When he’s not helping others, Saunders enjoys hunting and saltwater fishing, both of which he hopes to do more of in retirement.

Saunders said he likes to help people if he can and will continue to do so.