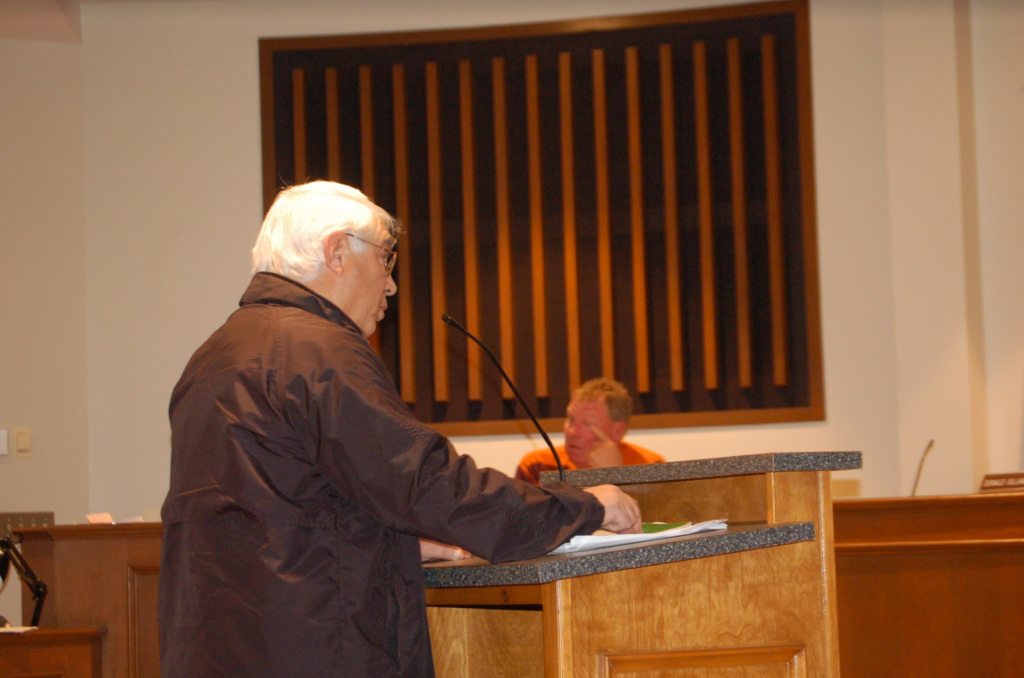 The Prince Edward County Planning Commission voted 6-2 on Tuesday against a motion to approve a special use permit that would allow a Dollar General store to be built at the corner of Prince Edward Highway, Route 460, and Rice’s Depot Road.

Commission member Robert M. “Bobby” Jones, who represents the Lockett District on the county’s board of supervisors, and Jack Leatherwood were the only planners to vote for the motion that would have recommended approval of the permit with conditions, including a sign indicating no right-hand turn for 18-wheeler trucks, buffering of neighboring residential areas with Leyland Cyprus trees and a six-foot privacy fence, the addition of a brick front and adding an extended right-turn lane into the store’s parking lot.

Seven of the eight members of the community who spoke during the commission’s public comment period opposed the measure, largely due to traffic concerns.

“What happens if a school bus is coming around there and maybe five people die?” Rice resident Kenneth Jackson said. “Is that worth a little convenience when you could just build it two blocks away?”

Rice resident Jim Pohl said building the Dollar General store at the proposed location would start a dangerous precedent for the intersection, enticing developers to build on all corners.

“I think if you take 500 cars that are coming and going through this conglomerate, that’s 500 different perpendicular decisions that drivers need to make that they are not making right now,” Pohl said, speaking hypothetically. “That’s 4,000 a week. That’s 200,000 perpendicular decisions that are not going on there right now — if you build four corners of that — before VDOT fixes anything.”

Project engineer Michael Lynch, who’s working with Par 3 Development — the firm proposing the Dollar General store — said from 2014 to the latest published study from the Virginia Department of Transportation (VDOT), the number of cars per day going through the area has been about 13,000.

According to the information he received from the VDOT and Virginia Department of Motor Vehicles’ websites, he said in 2013 there were two accidents at the intersection, with an annual total of 5.1 million vehicles traveling through the area annually. He equated the accidents to 0.00004 percent of total vehicles.

He said in 2015 there was one accident based on 4.74 million vehicles going through the area, which he equated to 0.00002 percent of accidents per vehicle.
Planning Commission Vice-Chairman Chris Mason said he takes a separate route when he travels with his family around just to bypass the area.

“I’ve lived out there for 19 years and I’m not sure what statistics this man has, but I feel like I’ve personally seen more accidents than that,” Mason said. “I feel like the comments about the traffic danger of the traffic situation were in no way overstated.”

Planning Commission Chairman John Townsend said according to the county’s Comprehensive Plan, between 2008 and 2011 along the Route 307 corridor to Bush River, there were 113 vehicle accidents.

“It’s the highest number in the county,” Townsend said.

The commission cited the VDOT and DMV numbers as only recording accidents that were reported by Virginia State Police. Townsend said the Comprehensive Plan cited the Route 307 and 460 interchange as being a geometric deficiency.

Prior to the meeting, Townsend received a petition that included 292 signatures in support of the proposed Dollar General store.

Many of the seven who spoke against the permit were in favor of a Dollar General store being built in a different location that still remained in proximity to the location of Rice’s Depot Road and Route 460.

The denial of the permit is a recommendation to the board of supervisors, which could grant the permit.