McCraw honored by Library of Virginia 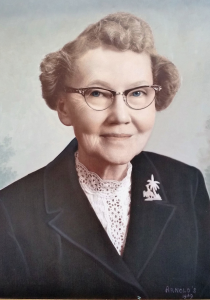 Louise Harrison McCraw — a late Buckingham County resident and co-founder of Richmond’s Braille Circulating Library — is among eight women nominated for the 2017 Virginia Women in History program curated by the Library of Virginia.

According to a Library of Virginia press release, McCraw, who was born in 1893 and died in 1975, co-founded the circulating library to meet the needs of an underserved population.

Dr. Gregg Kimball, the Library of Virginia director of public services and outreach, said the selection process for the program was based on nominations from the public. Kimball said the nomination was made by Joanne Yeck, an author and regular contributor to The Buckingham Beacon.

He said Yeck has worked with the Library of Virginia in past years nominating women for the Virginia Women in History Program.

Yeck said several years ago, in an attempt to identify what McCraw contributed to the Virginia Historical Inventory — which was organized under President Franklin D. Roosevelt’s Works Progress Administration — she was introduced to McCraw, her novels and her life of service to the blind and the vision impaired around the world.

“It was not long before I was convinced that she was a remarkable woman,” Yeck said.

Yeck said her research resulted in an essay tracing McCraw’s life from Buckingham to Richmond, covering her dual careers. Yeck said that having followed the Library of Virginia’s program for years, she thought McCraw was a perfect candidate for the Virginia Women in History program, and the library agreed.

“I feel her life of service is an excellent example of the impact that one dedicated person can make,” Yeck said. “She, and others like her, are the humble, unsung heroes (and heroines) of Virginia.”

McCraw’s original position at the Richmond Braille Circulating Library was secretary before 1935, where, under her direction, the library began sending evangelical Christian literature to every state in the nation and 16 countries across the globe.

The library’s press release stated this year’s program will culminate on March 30 with a program recognizing the honorees. The evening will begin with a reception at 5:30 p.m., followed at 6:15 p.m. with an awards ceremony emceed by Virginia Public Radio host May-Lily Lee. The reception will be held at the Library of Virginia, located at 800 E. Broadside St., Richmond. The reception and program are free and open to the public.