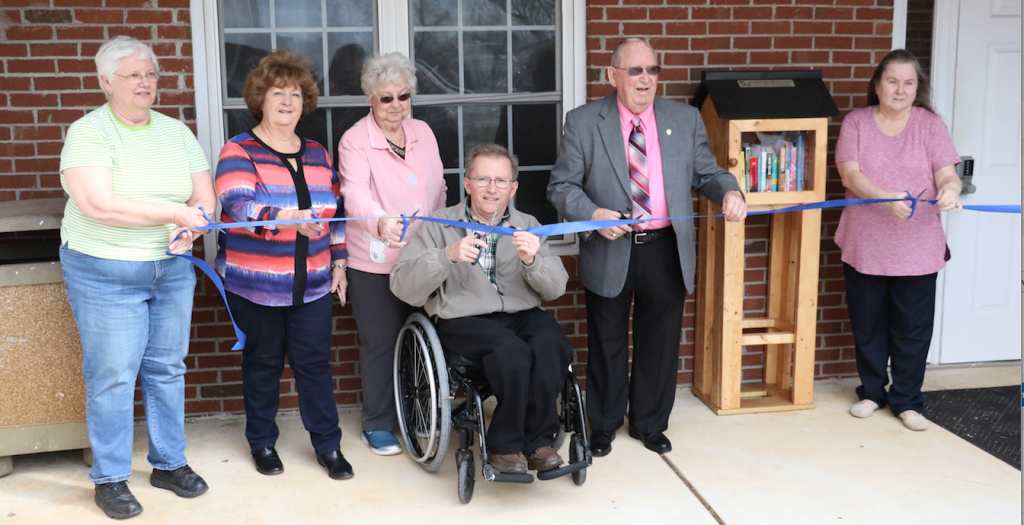 Prince Edward County may have only one big library, but it gained a seventh little library Saturday afternoon in Darlington Heights.

As described at LittleFreeLibrary.org, a Little Free Library is a “take a book, return a book” free book exchange. The little libraries come in many shapes and sizes, the most common version being a small wooden box of books. Anyone may take a book from it or bring a book to add to it.

A small group of people gathered Saturday for the ribbon cutting that marked the opening of the county’s latest Little Free Library, this one located at Darlington Heights Volunteer Fire Department.

“We now have Little Free Libraries in every district of the county, including Farmville,” said Vicky Page, who is vice chair of the Friends of the Farmville-Prince Edward Community Library. “The Friends maintain five of them. Two of them are independently maintained in Farmville.”

Page said the project of populating Little Free Libraries in the community started as a method of helping the underserved and unserved in the county to have access to reading material.

“We only have one library in the county, and so people may not want to drive 17, 20, 30 miles to get a book,” she said. “So by bringing the books out to the people in the county, it provides a way of providing reading material for all ages.”

After receiving the summer reading lists for students from Prince Edward County Public Schools and Fuqua School, the Friends put those books in the little libraries.

“One of our goals during the summer is to prevent summer reading slump, which is a very acute problem, especially in rural areas,” Page said, adding that having a little library in a given area “helps with adult literacy, it helps with child literacy, and it’s been accepted as a win-win situation all the way around.”

The first little library that the Friends installed in the county was in Rice at Jenkins Blue & Gray in November 2014.

Page explained that the concept of a Little Free Library is, at the beginning, essentially “take a book” without the “return a book” part.

“It took about 18 months for our first one to start the reciprocal process of leaving a book,” she said. Now, “we have two of them that are pretty much self-sustaining, but the Friends come on a weekly basis and stock it with books and make sure that it’s tidy. So, we have Friends volunteers who have charge of their Little Free Library.”

Page said the books in the little libraries are at no cost to the county.

“They are books that have been donated to the library for book sales or other things,” she said, also noting that LittleFreeLibrary.org sent $200 worth of free books.

The little boxes may contain fiction and nonfiction books for both children and adults.

She noted the only thing the Friends do not want in the little libraries are books that are yellowed and in disrepair.

As for the physical structure of the libraries, Page said the Friends purchase kits from LittleFreeLibrary.org, and Friends volunteers put them together while also constructing a base.

Connie Seburn and her husband built the Darlington Heights little library, which consists of a plexiglass door with a magnetic clasp making up a polyurethane-stained wooden box and base.

“We went around to the different ones and looked at the bases to see what we liked and decided that was how we were going to do the base,” Seburn said. “And then it really didn’t take that long. It probably took a week and a half.”

Page said Howard Simpson, who represents Farmville District 101 on the Prince Edward County Board of Supervisors, has been a staunch supporter of the Little Free Libraries, and he pushed to have one in Darlington Heights.

“We have put them in different sections of the county all the way around, and I thought if we could put one here, the library would be beneficial to the people in this neighborhood,” he said.

“It brings together the community a little bit more,” he said.

Page said she was proud that the Friends took on the ongoing project.

“The goodwill that’s been generated for the library in the communities has been astonishing,” she said.