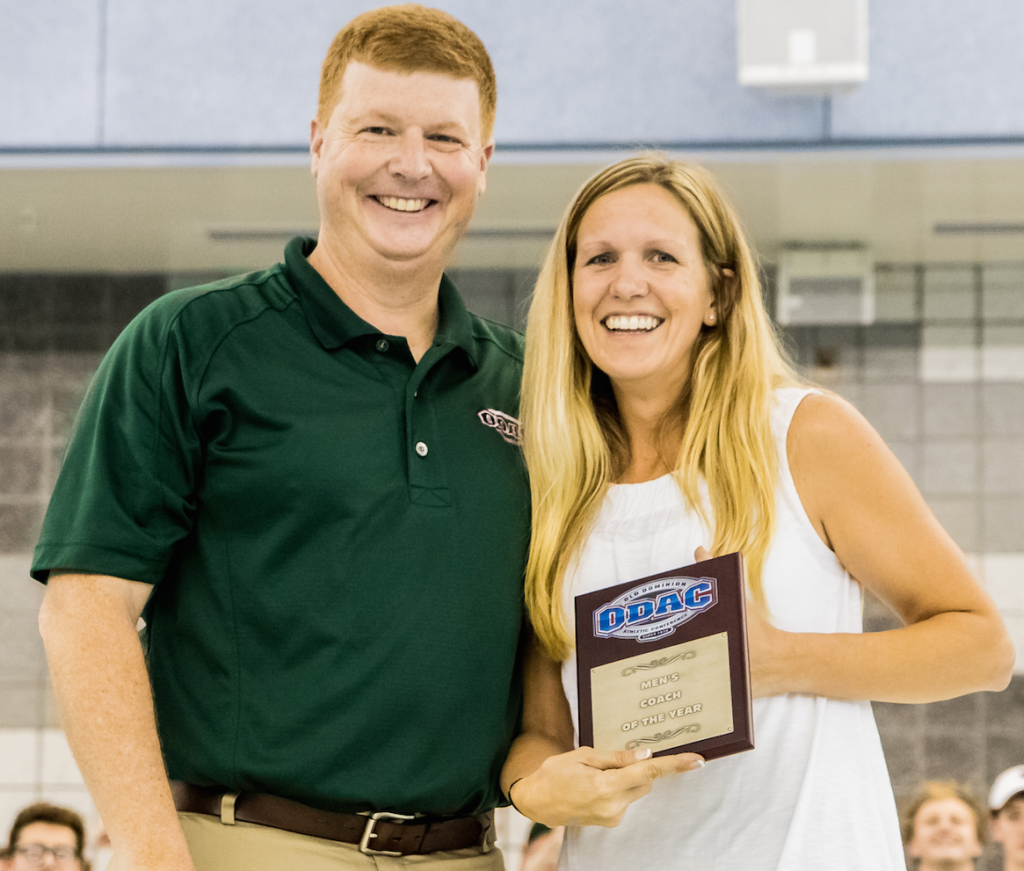 Leonard was not expecting the accolade and was upfront about her reaction to being named.

“I about dropped over,” she said. “I know that I told a couple of my guys that I thought I was going to pass out. It’s always selected by the other coaches in the ODAC, but it’s typically the coach who has the team who wins the meet.”

“(Kami) actually came to me and told me that she voted for me,” said Leonard, who has coached Hampden-Sydney’s swimming program since its inception in 2011. “She did tell me that her decision was because of the amount that the program has grown in the six years and the fact that we only have men.”

Leonard said it is difficult to build a men’s or women’s team without the other gender in sports that are typically coed.

She also helped the program make history by leading it victory over Randolph-Macon College at the ODAC Championships. The Tigers placed second with 544 points, while the Yellow Jackets placed third with 510 points.

“When we beat Randolph-Macon this year, it kind of sparked everyone’s interest, and they looked a little deeper into Hampden-Sydney swimming,” Leonard said.

She noted that women being involved in athletics as coaches, assistant coaches and more is becoming increasingly common.

“I don’t even think about it anymore as me being a coach at an all-male school,” Leonard said. “I guess I’ve been here long enough where it doesn’t jump out as anything weird to me or to anybody else on campus. But when you get an award like that, and they kind of highlight that you’re a woman coaching a men’s sport, it is kind of cool. It’s kind of cool that women are doing well in athletics.”

Hampden-Sydney Interim Athletic Director Davis Yake said he was incredibly excited for both Leonard and the swim program when he heard she had earned ODAC’s top coaching honor.

“What has impressed me about her performance is the dedication she shows and effort she gives while balancing also being the cross country coach and the fitness center director,” he said. “From day one of the swim program, her goal was to beat Randolph-Macon, and to do that in the 2017 ODAC Championship while being named Coach of the Year is an incredible honor for her. We could not be more proud.”

Leonard said she wanted the honor to instead be the Team of the Year, “just because this team is pretty much why I was selected. They worked their butts off, and the coaches saw that in six years, the program has come so far, and these guys really kind of shined at ODACs.”