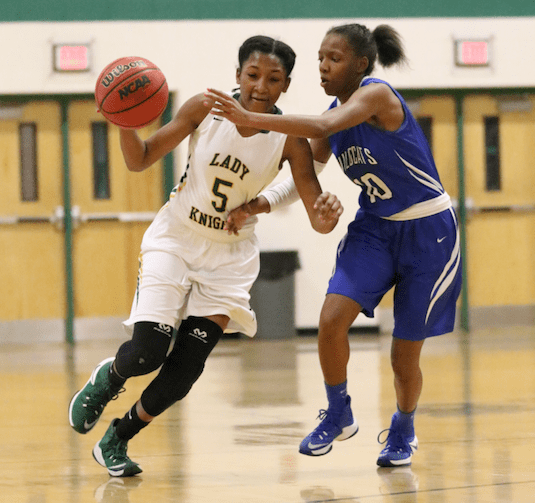 The Lady Knights (13-7) now advance to face host No. 1 Gretna High School on Wednesday at 6 p.m. in the semifinals.

After the first quarter Monday, Buckingham and the Lady Wildcats were locked in a 7-7 tie. The Lady Knights charged ahead 22-11 at halftime and led 38-28 after three quarters.

Swann added, “I felt we had to bring the good intensity to get through this whole game. We had to work as a team together.”

Coach Chambers agreed that it was a good team win.

“I think, offensively, we moved the ball, and we were able to put it in our guards’ hands, who got some shots off the perimeter,” the coach said. And though Buckingham did not get many contributions from its post players, “we were able to find them some down low, as well.”

The coach has some idea of what to expect when her team takes on the top-seeded Lady Hawks on Wednesday.

“I have watched one of their games, and they’re an aggressive team that plays all four quarters,” Coach Chambers said. “They are scrappy, and they also control the offense by putting the pressure on us and then getting those fast breaks off of that. So, in order to run with them, we have to be able to control the ball, and my guards need to handle the ball.”