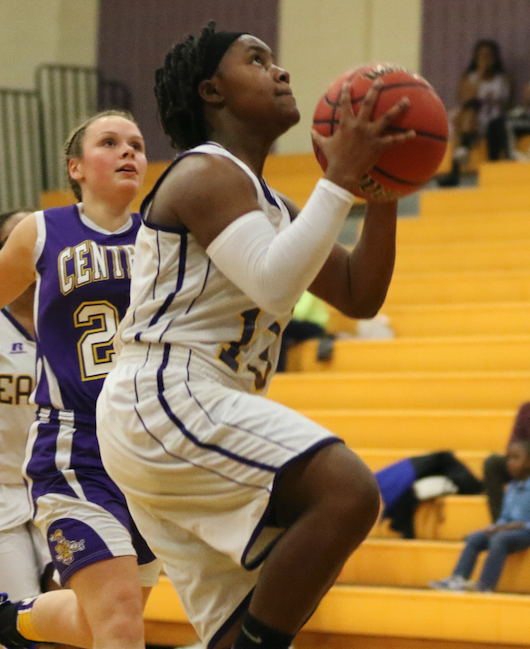 The contest bore similarities to Prince Edward’s final game of the regular season in which the Lady Eagles suffered a 68-53 road loss to Buckingham County High School.

Prince Edward trailed the Lady Raiders 10-8 after the first quarter, 20-18 after the second quarter and the game was tied 34-34 after the third. Then, Amelia outscored the Lady Eagles 17-2 in the fourth.

A key factor in both the Amelia and Buckingham games was the absence of Prince Edward junior Kadeshia Wright.

“She just wasn’t available to us for a couple games,” Redd said.

As an outstanding defender for the Lady Eagles, Wright is key to making the team’s pressure defense work.

“With Kadeshia, I can use the press as an offensive tool,” Redd said. “But without her, we have to play a different style of basketball, which we aren’t used to. So, I blame some of that on myself, but we work with what we’ve got.”

The coach noted that because Prince Edward lacked height this year, it was imperative that it kept up the tempo in order to wear out opposing, taller teams. The Lady Raiders were able to slow the game down and avoided having tired legs in the fourth quarter.

Prince Edward finished the season with an overall record of 9-14, and while Redd hoped for more wins, he saw key reasons to praise his players.

“I’m very proud of them,” he said. “They gave me total effort. There was never a point where I wondered if my team really wanted to play when they were on the court.”

The coach was also pleased to see Harris assume a new role in relation to her teammates beyond simply being a dynamic scorer.

“You follow who your strongest person is, and I see them following Da’Mya, and I see her leading, becoming more and more of a leader,” Redd said.