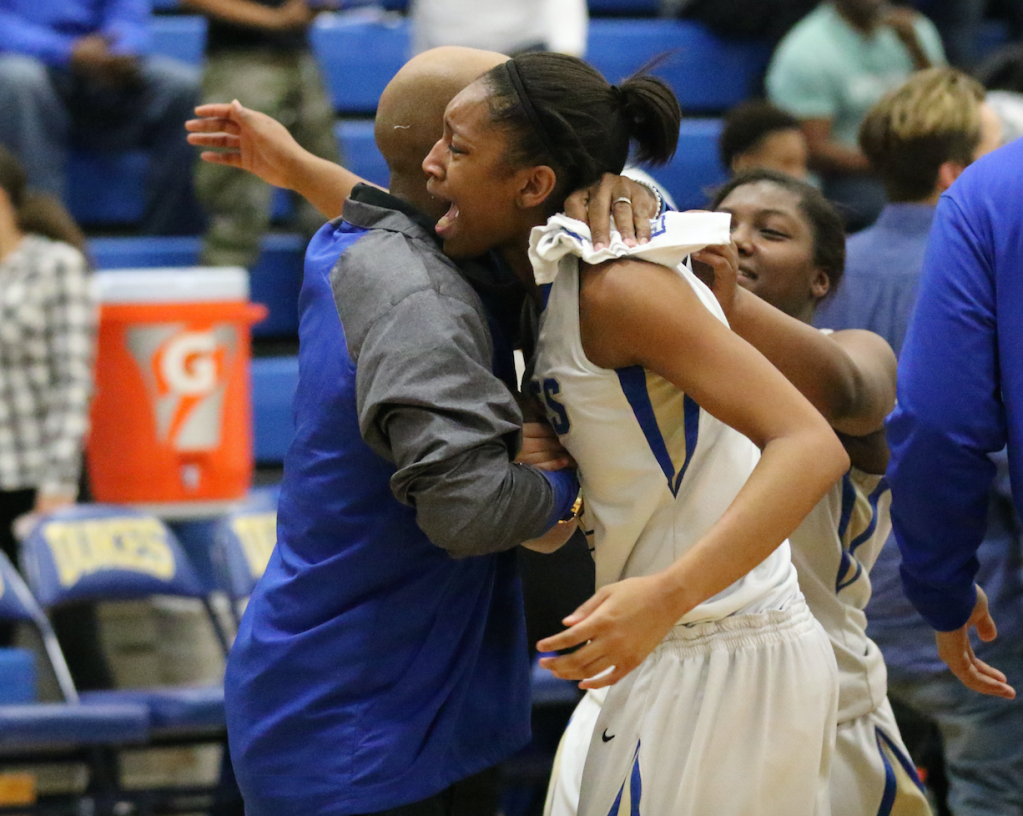 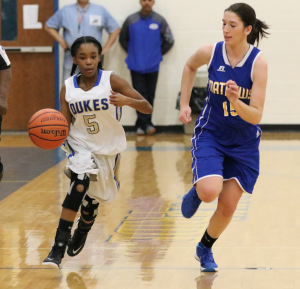 The trophy commemorating the Conference 42 girls basketball tournament champions found its new home Friday night. For the first time ever, it will be residing at Cumberland County High School.

With a strong team defensive performance and five clutch points late in the game from senior forward Bria Anderson, the top-seeded Lady Dukes stormed into school history with a 42-40 victory over visiting No. 2 Mathews High School.

“It feels amazing,” Anderson said after the game. “I’ve never had a feeling like this.”

By reaching the conference tournament final, Cumberland clinched a berth in the Region 1A East tournament. The Lady Dukes (15-7) hold the No. 3 regional seed and host No. 6 Essex High School on Wednesday at 6 p.m. in the quarterfinals.

On Friday, the Lady Blue Devils led for much of the first half, holding a 17-12 advantage after the first quarter and a 27-25 lead at halftime.

The weight of every single point was significant in the second half, as scoring became anything but easy. 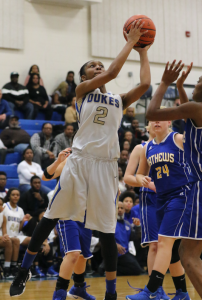 TITUS MOHLER | HERALD Cumberland High School senior forward Bria Anderson prepares to release a shot that gave her team a one-point lead with 1:29 left in the Conference 42 tournament championship game Friday night. The second of her free throws with 36.7 seconds provided the deciding point in the No. 1 Lady Dukes’ 42-40 win over visiting No. 2 Mathews High School.

Cumberland took a 28-27 lead with less than two minutes remaining in the third period, and Mathews did not score its first points of the half until only 1:13 was left in the quarter.

The Lady Dukes went into the fourth quarter on top 32-29. Mathews tied the game at 32 on a three-pointer with 6:22 to go, but the home team was able to go back up 35-32 on a basket and free throw from junior guard Olivia Sims with 5:41 left.

The Lady Blue Devils crept back and then went up 36-35 on a three-pointer with 2:24 on the clock.

With momentum hanging in the balance, Cumberland desperately needed points to reclaim the lead.

“Sometimes you doubt yourself and you’re like, ‘I’m off, I’m not shooting well, I can’t do it,’” Anderson said. “But you get more confidence when someone tells you, ‘(The) ball needs to be in your hands, you’ve got to do something with it.’ So, I knew what I needed to do, and I did it.”

She navigated around Mathews defenders, got inside and scored to put her team up 37-36 with 1:29 remaining.

“But once I did it, I understood they couldn’t take that out, how I was attacking, so I just kept doing it,” she said.

Maneuvering her way inside again, Anderson scored to make it 39-36 with a little less than a minute to go.

“That’s what I expect out of her,” Liggins said. “She’s my go-to girl, and when I know I needed those points, you see who I went to.”

Seconds later, the Lady Blue Devils responded by making two foul shots. The ball again went to Anderson, who was fouled with 36.7 seconds on the clock. She hit both free throws, the second of which proved to be the championship-clinching point.

Mathews once more cut into the lead, making the score 41-40 with 22.3 seconds to go, but senior guard Tonishea Ford hit 1-of-2 free throws for Cumberland, and the Lady Dukes defense held the visitors at bay in the final seconds.

When the final buzzer sounded, the crowd erupted, and the Cumberland bench ran onto the court to celebrate with the rest of the team.

“I’ve never won any kind of championship except our Christmas tournament,” Anderson said. “I can’t describe it. I’m so excited. I’m so happy. I’m glad we did it for our coach.”

As for why his players finished with two more points than the highly competitive Mathews (16-7), Liggins said, “They just kept fighting. That shows you how bad they wanted it.”