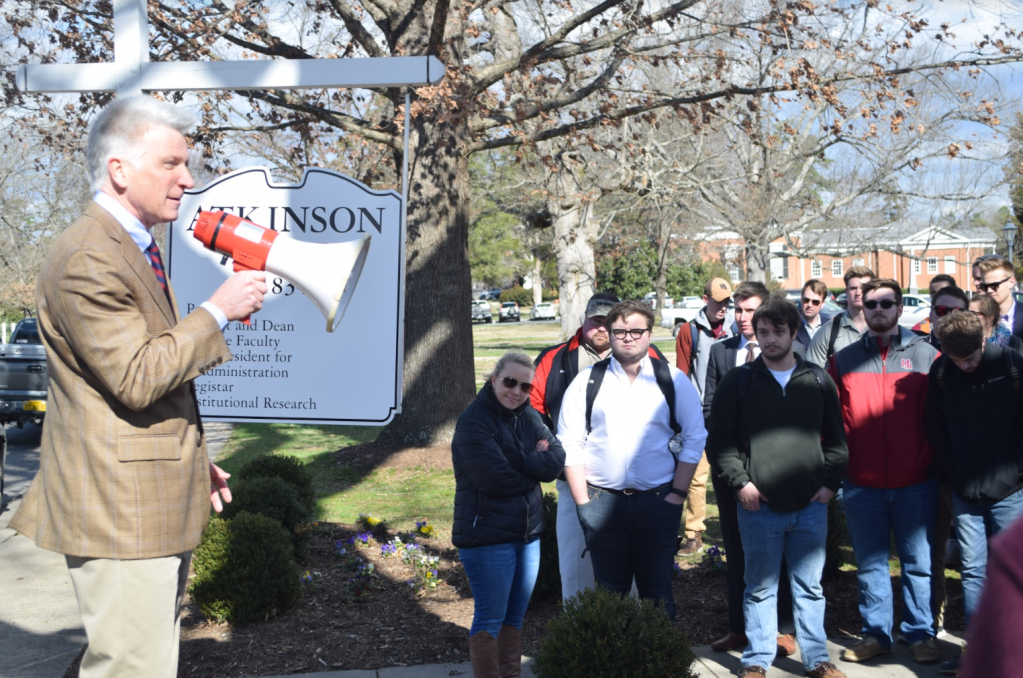 More than 70 Hampden-Sydney College students stood outside Atkinson Hall on H-SC’s campus Thursday to protest the resignation of Dean of Students David A. Klein.

Klein, a Hampden-Sydney alumnus who had worked at the campus for over 25 years, told The Herald last week, “Provost (Dennis) Stevens let me know that (H-SC President Larry Stimpert) wished to bring in his own dean of students.”

During the protest, students said Klein should be reinstated, or at least given a proper send off. According to Tanner Beck, one of the protest organizers, Klein was given a 130-word statement for his time and dedication to the college. Beck also noted very little information was given to students for Klein’s resignation.

Stimpert, who was asked to speak during the protest, praised the students for showing their support but asked them to “trust” him.

“I had a history professor in college who later went on to be a college president; when I got the opportunity to serve you as president here, he called me to congratulate me,” Stimpert said. “He said, ‘I only have one piece of advice for you: You are the only person who will see the whole picture.’ I’m going to ask you to trust me,” Stimpert told the students.

Beck said that will be difficult to do.

Students protesting outside Atkinson Hall spoke of fond memories of Klein, also known by many as “DAK.”

A common theme among students was Klein’s serving as a father figure and, to some, a brother.

“What makes Hampden-Sydney special is that we’re not just a school, we’re a family,” said Beck. “Without the Kleins, this family is not whole.”

“I think the thing about kids our age right now is that we’re all trying to find that transition from being a boy into becoming a man,” student Jake Edmonds said. “When they’re away from their family and parents, it’s harder to grow in that regard, but Dean Klein has (helped a lot).”

Those at the protest spoke on what Klein had done for the students and the college over the years. Students said while they respected Stimpert, they disagreed with the decision of Klein’s resign.

“It is my opinion and the opinion of others — and I’m not trying to criticize the power of the president or the college board — it is my opinion that the importance of Dean Klein has been grossly miscalculated,” student James Mills said.

“It feels like we are being treated as if we were children and a parent is telling us not to worry, that they were doing what’s best for the family,” Beck said. “I think that it’s hard to trust without information. Frankly, I trust Dean Klein.”

Stimpert declined to comment on the reasons for wanting to appoint a new dean.