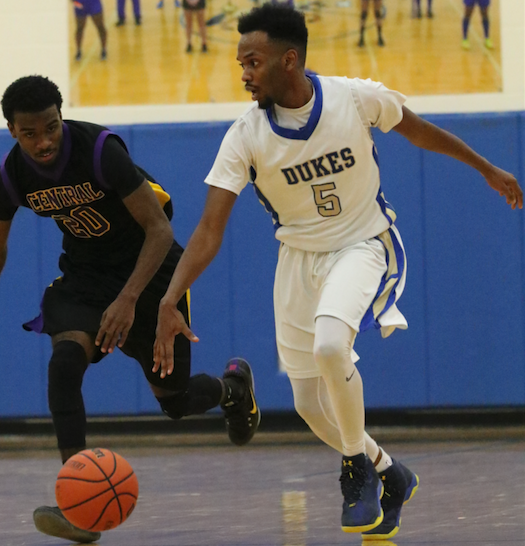 “It was much-improved from last night,” Dukes Head Coach Tyrone Mosby said of his team’s performance, referring to the Dukes’ 67-48 Thursday home loss to Goochland High School. “Tonight was definitely a better defensive night. We limited our fouls. We got some easy layups. We missed some easy layups, too. We did get out and run, which we should be accustomed to by now. And we shared the basketball.”

Cumberland led 14-13 after the first quarter, trailed 23-21 at halftime, regained the lead in the third quarter and pulled away in the fourth.

Key to Cumberland’s efforts in the final period was senior guard James Booker, who highlighted Senior Night by also scoring 18 points for the game.

“If it wasn’t for my team, I wouldn’t have done what I done,” Booker said. “We just played as a team.”

As for what pushed him to step up his game, Booker noted he is driven by the goal to honor a departed loved one.

“Really, it’s the death of my dad,” he said. “I’m just playing for him and playing for my team.”

The win improves Cumberland’s overall record to 4-17, and now the team must wait to see how the other teams in Conference 42 perform in their remaining games before finding out its seeding for the conference tournament.

“I don’t know exactly where we are in the conference, because we’ve still got, like, four teams that are still playing games next week,” Mosby said Friday. “So, that won’t be official, probably, until (Feb. 10).”