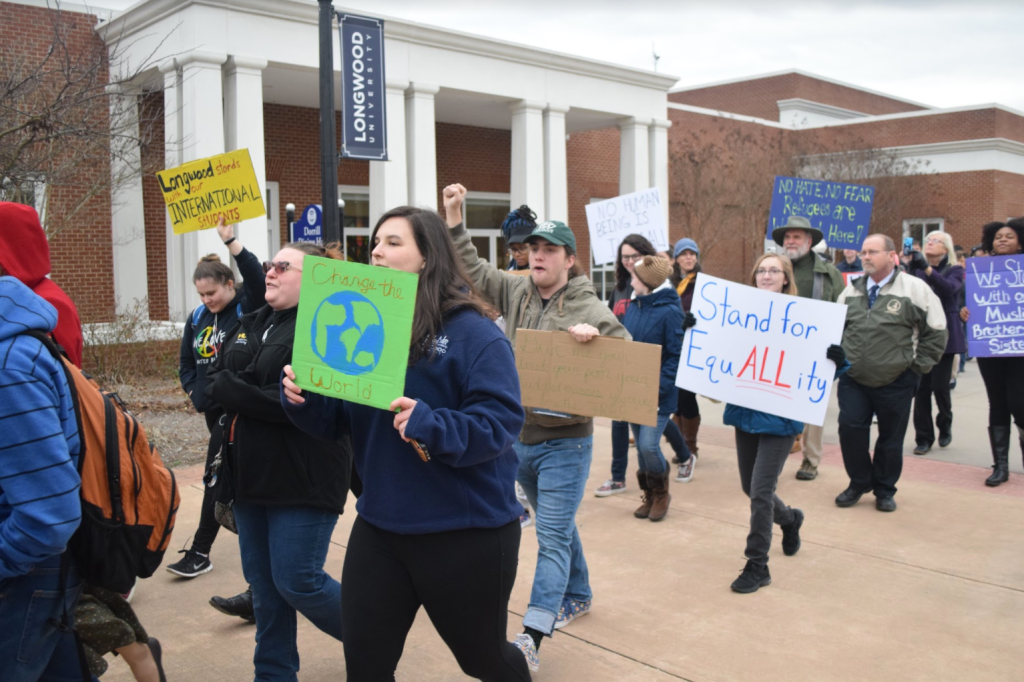 Around 40 Longwood University students, faculty and staff gathered on campus Friday to march for “solidarity, support and reassurance” in light of the recent executive order by President Donald Trump — one that’s been interpreted as direct discrimination toward Muslims.

The ban, one of over 15 executive orders signed by Trump, seeks to prohibit people from seven predominantly-Muslim countries from entering the United States.

The march was initiated by the Citizen Leadership and Social Justice Education group at Longwood in collaboration with other student groups. Despite the chilly air, dozens of protesters gathered to march.

The march began at Center for Communication Studies and Theater building on Longwood’s campus. Students and faculty carried signs, chanting, “No hate, no fear, refugees are welcome here!”

The group marched across Longwood’s campus to Beale Plaza, near High Street. There, protesters spoke about the issue and signed petitions that will be soon sent to state legislators.

Joseph Hyman, president of the College Democrats at Longwood, said while the group may not be being heard and seen on national news, they are part of something much bigger.

“We are taking the courage to stand up for what we believe in; we want to make sure that we stand up for justice in the world and for the ideals that make us American,” Hyman said. “Our protest may not have massive influence, but if there’s a protest here and at Hampden-Sydney, and at UVa and VCU … if all of those schools and communities stand up together, we can make a difference.”

Brenda Pereira, president of the Hispanic and Latino Association at Longwood and a staff member in the Office of Student Diversity, said something needed to be done.
“Clearly there is an uneasiness; we have international students whom this is personal for, and (the ban) isn’t okay,” Pereira said. “It’s gotten to a point where it’s passed politics to a point where it’s humanity and morality, so we are here to give the students a voice and a platform to show they are against this.”

“There was just a need,” Page said. “If you look at the (atmosphere) and the feeling that’s been going on across the country and the campus over the last few weeks and months, there’s a tremendous polarization. This (event) was intended to be not a political rally or an anti-anyone rally, but more of a rally of solidarity, support and reassurance that we are one community.”

The College Democrats will hold a similar rally Saturday at noon at the Prince Edward County Courthouse.

This is a corrected version of an earlier story, posted Friday.