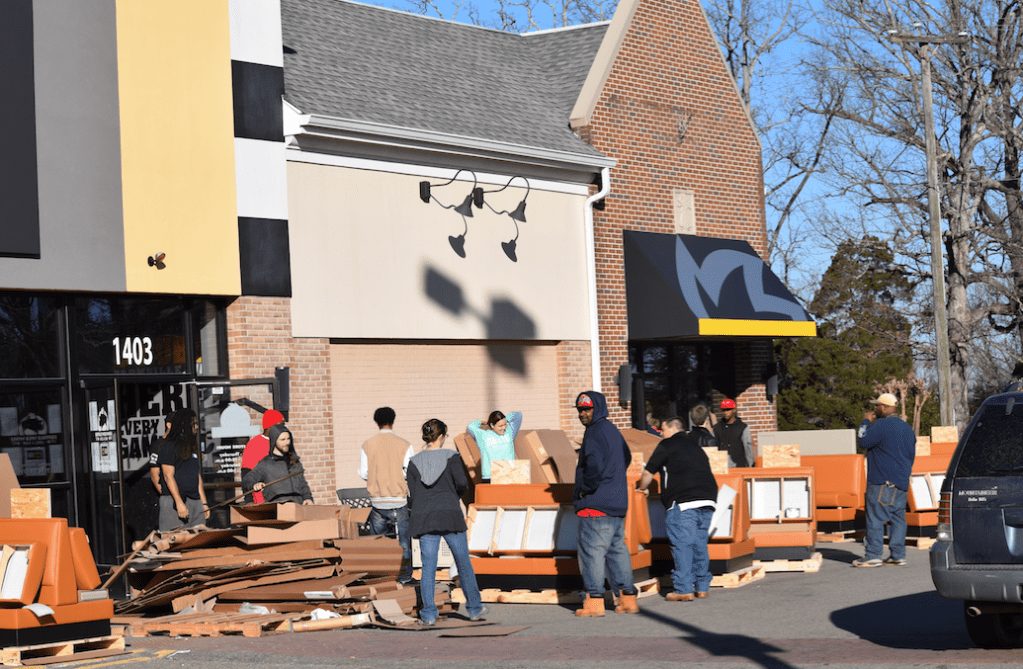 BRIAN KLINGENFUS | HERALD Buffalo Wild Wings employees and other construction workers prepare the new booths to be brought inside the renovated building.

Starting Feb. 6, the day after the Super Bowl, the business closed to repaint, redecorate and remove the old dining booths and install new ones, according to General Manager Justin Brown.

“We wanted to freshen it up and make this a little bit better place to come,” said Glasscock. “Things get worn out over time through traffic; you want to keep it fresh and exciting.”

Glasscock said the new booths that were put in are a shade of lighter brown to mimic the color of footballs and basketballs to give the restaurant a sportier environment.

Guests will be greeted upon entering by a message on the wall saying “WELCOME TO B-DUBS FARMVILLE, VA. HERE EVERY DAY IS GAME DAY.”

In addition, jerseys of area high school and college sports teams have been framed and hung on the wall just inside the doors.

Brown said the restaurant placed a sign on its doors letting the community know of the renovations. Even still, Brown said, the company received many phone calls asking why the restaurant was closed.

Longwood University student Zachary Curtis said having a Buffalo Wild Wings in Farmville is a good way to bring the community together. Curtis said he is looking forward to seeing the new renovations.

The first Buffalo Wild Wings opened in Columbus, Ohio in 1982. Since then, they have expanded to over 840 across 48 states, serving almost two billion wings, according to its website.

In 2014, the franchise sold over one billion boneless wings and 768 million traditional wings, topped with any of 16 distinctly different sauces and five seasonings.