An inspirational invitational at LU 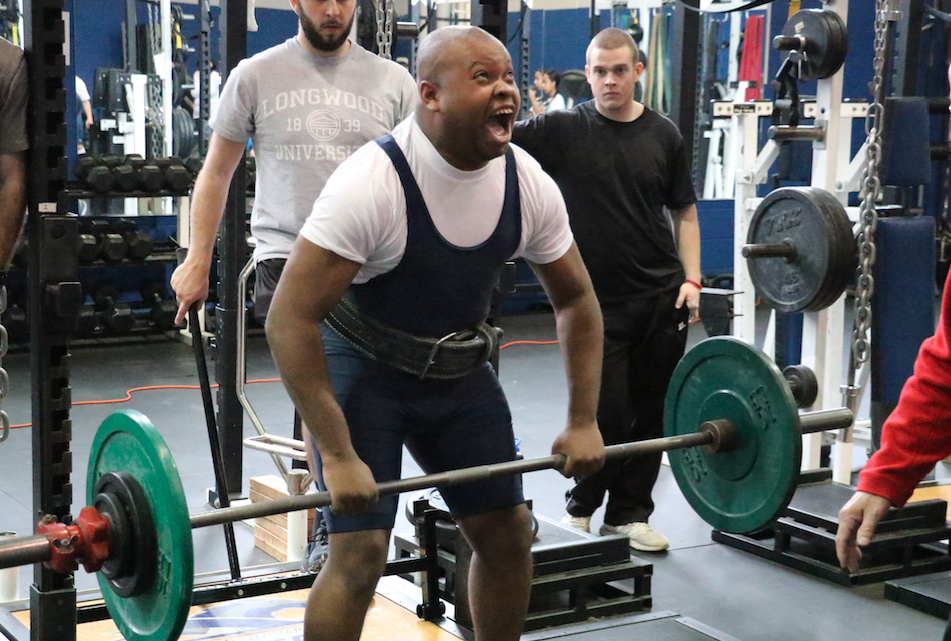 Spirits were lifted right along with weights Saturday morning in Iler Gym.

“It was awesome,” said C.J. Roth, the assistant sports performance coach at Longwood who helped coordinate the event. “From the students who came to support, the student-athletes, people from around the area, the town, I was actually really surprised and really happy to see the great turnout that we had, because it required people to take time out of their weekend.”

Among those present were some of Longwood’s cheerleaders, cheering alongside a group of cheerleaders from Area 12. Longwood men’s basketball players, lacrosse players and women’s tennis players also visited Iler Gym to show their support.

Lisa Wimbush, Piedmont Region Director for SOV, was excited with how the invitational went.

“I am so pleased by the support, not only from the Longwood students, but the community,” she said. “It was such an engaging and inspiring event. I love powerlifting because you get to really see the athletes in a whole different element. You see an athlete, and all you see is an athlete. You don’t see their disability. You just see their strength.”

The invitational featured three different events in which powerlifters could show their strength: squat, bench and deadlift.

Grayson Mullins, an Area 12 coach who helped put the invitational together, noted his powerlifters were energized by the atmosphere of the event. He had two athletes competing — James Mullins, his son, and Roman Johnson. The younger Mullins lifted 120 pounds in the squat event, 135 in the bench event and 245 for the deadlift.

“My son, when he picked up that 245,” Grayson Mullins said, “a week ago, he couldn’t pick it up. … But all the excitement and everything going on, he pulled through.”

Johnson, who is new to powerlifting, lifted 100 pounds in each event.

“He’s got to learn a lot of technique, and technique is harder than the weights, almost,” Grayson Mullins said. “But he did excellent today. I’m real proud of him, too.”

Mike Canaday, the head coach of Area 11 and the national coach for the state of Virginia, said he has been to a lot of first-time events, and “this is one of the best, if not the best that we’ve ever been to,” he said.

Mullins expressed gratitude to Longwood for providing the gym, but also for supplying medals and lunches.

“Usually we’re trying to raise some money to have that available,” he said.

Wimbush said hopes are high that the Lancer Invitational will be an annual event, constantly growing, drawing more athletes from across the state.

“Unfortunately, powerlifting is not a very popular sport,” she said. “It’s aging out, and so we’re looking to Longwood to bring it back to life.”

Adding prestige to the event for athletes was a medal presentation ceremony on Jerome Kersey Court during halftime of the women’s basketball game.

“Just from talking with the crowd today, a lot of the parents, a lot of the supporters, they really want to do (the invitational) again next year and on a bigger scale,” Roth said.