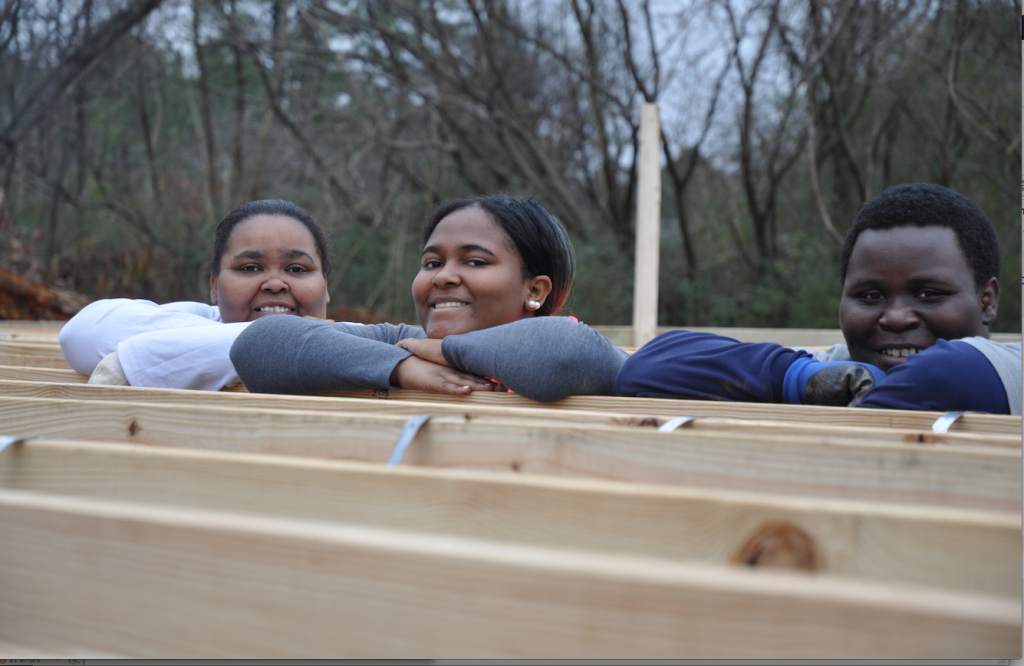 Marquita Scott, left, and her children, Sakia White and Xavier Crenshaw, stand among floor joists in their new home, which is under construction at 99 Culberth Street in Dillwyn.

A Farmville Area Habitat for Humanity project for a mother and her two children in Dillwyn is set to be complete by May. The house will be for Marquita Scott and her children, Sakia White, 15, and Xavier Crenshaw, 13.

The house will be about 1,200 sq. ft. The family is currently renting a trailer.

“We’ve just completed the roof and the doors and windows are hinged,” said Bill Kemp, a Habitat for Humanity volunteer coordinator. “In the construction business, that means we have dried in the house.”

Kemp said the home’s completion date hinges on weather and volunteers, but hopes by May they’ll have the home finished.

He said prospective volunteers can reach the Farmville Area Habitat for Humanity at (434) 394-3001 or through a contact form at www.FarmvilleHabitat.com.

Habitat for Humanity began in 1976. More than 1 million families in more than 70 countries live in Habitat houses, according to Kemp. The families living in Habitat houses have to put in what Kemp calls “sweat equity,” which means they have to work on their house as well as someone else’s house.

Habitat for Humanity Executive Director Jayne Johnson said Scott has almost all of the required 200 hours of sweat equity completed.

“Marquita and her family have been in our program for a year and a half and they have just worked right along with us on any project that we’ve been doing; (they’re) very enthusiastic,” Johnson said.

Johnson said Scott has attended all of the Habitat for Humanity homebuyer education classes and has received a certificate in acknowledgement of her attendance.

Kemp said families living in Habitat houses still have to pay for the property, but are given a no-interest mortgage, and because volunteer labor is used, the house costs far less than its value.

Kemp said that while volunteer labor is the backbone of Habitat for Humanity, donations are also welcome.

“One thing that we’ve been able to do very nicely in Buckingham is we’ve had a lot of people donate food for the volunteers,” Kemp said. “Lunches and snacks are always welcome.”

The proceeds from the store are put toward helping families, like Scott, in Prince Edward, Buckingham, Cumberland and Charlotte counties.

The Farmville Area Habitat for Humanity was established in 1990. Since then, it has completed 27 houses.