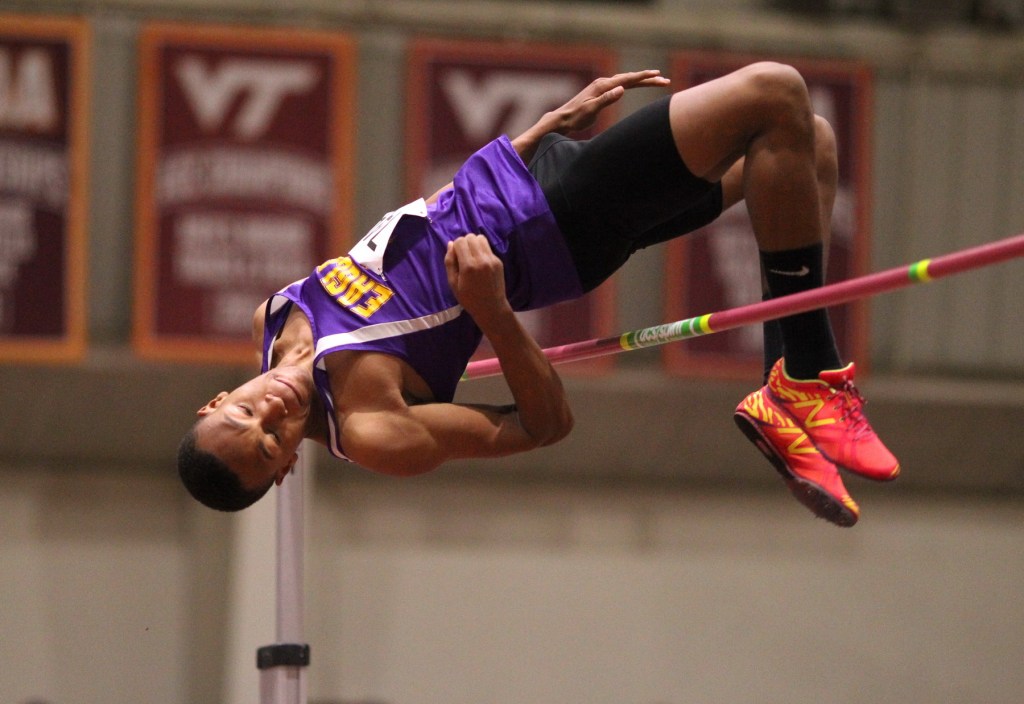 JON FLEMING Prince Edward County High School senior Rajai Walton flies over the bar while competing in the boys high jump at the Virginia Tech Premier High School Invitational over the weekend. He won with a 6-foot, 6-inch leap out of 13 athletes accepted to compete in the event.

Rajai Walton soared to the top of a select group of athletes competing in the Virginia Tech Premier High School Invitational over the weekend.

The Prince Edward County High School senior produced a 6-foot, 6-inch leap on his first attempt to win the boys high jump at the Blacksburg event, an invitational which has a strict admission process and into which only a limited number of athletes are accepted.

“Given the level of competition, he handled the pressure well,” Eagles Head Indoor Track and Field Coach James Baker said of Walton.

It was the first time Walton had won at the Virginia Tech event. He placed fourth in the high jump in Blacksburg last year.

Strong competition awaited him this year, some of which was familiar.

“Two of the guys that he beat were the two guys that out-jumped him at Fork Union,” Baker said, referring to the Fred Hardy Invitational, held Jan. 21.

Another competitor came into the Virginia Tech Invitational with a 6-10 seed jump, though he did not reproduce it.

“He cleared a 6-6, but what happened was Rajai cleared 6-6 on his first attempt,” Baker said, while the competitor needed more than one try.

While 6-6 is currently Walton’s personal record, he showed this may soon change.

“He almost had 6-8, but he clipped (the bar) with the back of his calf, so his body was over the bar,” Baker said.

Walton said he felt good to be selected to compete in Blacksburg, and winning was quite meaningful.

“I felt that my performance was very good, but knowing that I almost got 6-8, I feel like it can be much better,” he said, liking his chances for reaching the new high next time he competes.

Walton also placed 10th in the boys long jump, with a 21-foot leap.

The other athlete representing Prince Edward at Virginia Tech was senior Bryan Moses, who ran in the boys 55-meter dash.

“They only accepted 48 entries, and so he managed to finish 15th out of 48 guys,” Baker said. “And he probably would have done a little bit better, but somebody false-started in his heat, and he was a little nervous about getting out of the blocks too soon.”

This coming weekend, Prince Edward athletes will take to the new track at Liberty University.

Baker said he is looking for his athletes to meet state-qualifying times and marks in advance of the Region 2A East meet Feb. 14-15 in Richmond.

“The last two years, we haven’t had a regional meet because of snow,” he said.

If the trend continues, the Eagles will, once again, not be able to rely on high finishes at regionals to advance them to states.