Buckingham supervisors have agreed to only allow those who live or own land in the county to speak during their monthly public comment period.

District Two Supervisor Donnie Bryan offered the motion to make the change — which includes limiting all speakers to three minutes. 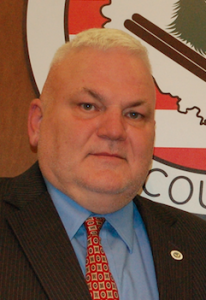 The change came during the board’s Monday annual reorganizational meeting.

“Some board members have suggested … limiting the public comment period to hearing comments only by county residents and/or real estate owners,” County Administrator Rebecca S. Carter said in a memo to supervisors regarding their bylaws — a document that sets operating rules of the board.

The action was unanimously adopted by the board.

“Truly, that’s the people (who) should be commenting during the public comment section …  people (who) have a vested interest in the county,” Bryan said after the meeting when asked the reasoning behind his motion.

Bryan said the action was not in response to the recent meetings and a hearing that brought numerous speakers from outside Buckingham regarding the proposed 600-mile Atlantic Coast Pipeline (ACP) project — one that’s drawn considerable opposition from those who’ve spoken before supervisors and county planners.

On Jan. 5, when the board held its public hearing regarding a special use permit for a 53,783 gas fired compressor station along Route 56, 76 people spoke, many of whom weren’t from Buckingham.

“It’s to hear just the county residents. It’s a chance for them to air their comments. That’s it,” Bryan said of limiting speakers to residents or those who own land during the public comment portion of the meetings.

Supervisors also agreed on placement of people or groups affiliated with the county on the meeting agenda, such as county-appointed committees or agencies that receive county funding. Such groups, seeking to make a presentation, “will be placed on the agenda before the board for presentation. Any deviations will require the chairman’s approval.”