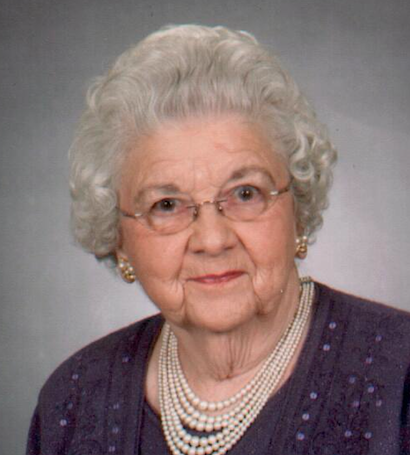 Rosemary Elam Pritchard, 92, joined her Heavenly Father on January 14, 2017 following a brief illness.  Rosemary, born February 9, 1924, in Elam, Prince Edward County, was the daughter of William Carter Elam and Janie Fuqua Elam and was the last survivor of her five siblings. She was the widow of Luther Douglas Pritchard Sr. to whom she was married for 64 years.

Mrs. Pritchard touched the lives of so many during her teaching career with Hopewell Public Schools. She taught in the 1940’s and 50’s before taking a sabbatical to raise her children, returning to teach middle school children from 1968 through 1986. She was made an Honorary Member of the Hopewell High School Classes of the 1950’s in October 2010. Mrs. Pritchard graduated from State Teacher’s College (Longwood University) on June 6, 1944. At Longwood, she was a member of Alpha Chapter of Kappa Delta Sorority. Upon graduation, she accepted a job as a business teacher at Hopewell High School where she taught for two years, and then moved to Roanoke to teach at Virginia Southern Business College. She returned to Longwood from 1947-1948, where she was the Assistant Dean of Women. The alumnae association awarded Rosemary the Distinguished Alumnae Service award in 1971.

Rosemary’s wonderful spirit will be missed by many as the days go by. She was the epitome of a Christian woman and seemed to make a quick friend of everyone she met. Her strong faith carried her through these last years and she always said how grateful she was that God had let her live so long. Those who knew Rosemary know she is back with all those she loved, especially Douglas, and is getting heaven reorganized and sharing her thoughts with all. Her legacy will continue in the lives of her children, grandchildren and great grandchildren.

Memorial contributions may be made to First Baptist Church, 401 N. Second Ave, Hopewell, VA 23860. Arrangements are being made by J.T. Morriss of Hopewell. Condolences may be registered at www.jtmorriss.com.